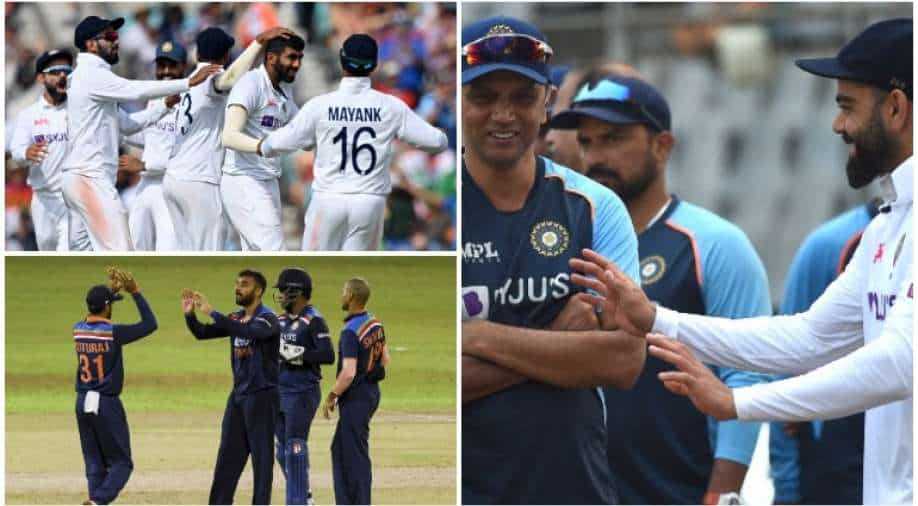 Talking about Indian men's senior cricket team, the Virat Kohli, Rohit Sharma-starrer performed in bilateral series across formats, played the WTC final and ended the year with some glaring changes in the team management. Here's looking back at the positives for Team India in the year 2021:

The calendar year is coming to an end. The year 2021 saw plenty of cricketing action take place, which included the WTC final, IPL 2021, T20 World Cup, India's women's tour of England and Australia, Ashes 2021, U-19 Asia Cup and many more. Talking about Indian men's senior cricket team, the Virat Kohli, Rohit Sharma-starrer performed in bilateral series across formats, played the WTC final and ended the year with some glaring changes in the team management.

Here's looking back at the positives for Team India in the year 2021:

Conquering Aussies Down Under

The year started with a second-stringed Ajinkya Rahane-led Indian team stunning Australia in their own backyard to win their second successive Test series on Aussies soil in the 2020/21 Border-Gavaskar Trophy. Contrary to what many would've thought, the heroes for India were Mohammed Siraj (13 wickets), Washington Sundar, Shardul Thakur, Rishabh Pant (with two half-centuries), Shubman Gill (equal number of fifties), etc.

After the Australia Tests, India romped past England in all forms of the game while hosting the Three Lions in early 2021. In Tests, India saw young guns such as Axar Patel (27 wickets), Rishabh Pant (second-highest run-getter for India), Washington Sundar (important fifties and 2 wickets) perform. In the limited-overs leg, the likes of Kohli, Rahul, Rohit, Bhuvneshwar Kumar rose to the occasion with some success for Suryakumar Yadav and Ishan Kishan.

What a solid bench strength

India's solid bench strength once again came to the fore during their limited-overs tour of Sri Lanka. The likes of Suryakumar Yadav (Player-of-the-Series in ODIs), Rahul Chahar (taking seven wickets in the tour), Prithvi Shaw (with some attractive knocks in the ODIs) made heads turn whereas Shikhar Dhawan, Bhuvneshwar and Deepak Chahar led from the front being the experienced ones among the lot.

This year's IPL was the first-ever season to be played in two halves, in India and the UAE. Talking about Kohli and Rohit, the superstar duo didn't have a great campaign with the bat for their respective franchises but the likes of Ruturaj Gaikwad (Orange Cap holder with 635 runs), Rishabh Pant, Shubman Gill, Sanju Samson, Prithvi Shaw remained in the top 10 for most runs among batters. In the bowling department, Harshal Patel (32 wickets), Avesh Khan, Varun Chakravarthy, Arshdeep Singh were among the top-10 wicket-takers.

While India's T20 World Cup campaign was a disaster, they returned with an unassailable 2-1 lead over England in the incomplete five Tests versus Joe Root & Co. in the United Kingdom. Bumrah returned with 18 wickets whereas Siraj finished with 15 scalps (second-most among Indians). With the bat, Rohit and KL Rahul led the show with 365 and 318 runs, respectively.

The year maybe ending with a controversy in the form of how things folded following the ODI captaincy row, however, Indian cricket fans can hope for things to be stable with an unfazed Rahul Dravid serving as the head coach. Dravid had led India in tumultuous times during the Greg Chappell-era. Hence, he has the calmness and excellent man-management skills to keep things afloat in the Indian camp during testing times as the captaincy baton has been passed from Kohli to Rohit in white-ball formats.

In 2022, India will complete their tour of South Africa, which is currently underway, host Sri Lanka, West Indies, Afghanistan along with preparing for the T20 World Cup in Australia under Dravid's guidance. Fasten your seatbelts as India look for more success in 2022.