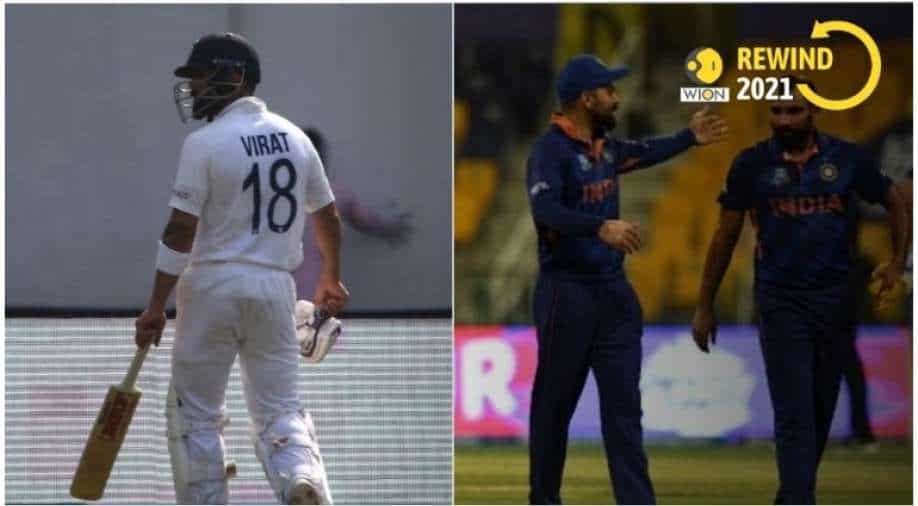 Virat Kohli in 2021: The superstar cricketer, who remains the poster boy of Indian cricket, ended 2021 without being able to lead India to any ICC title and went on to dent his terms with BCCI and the current selection committee in early December.

The calendar year is coming to an end. A lot of action took place in the sporting arena after the Covid-19 pandemic wreaked havoc in 2020. Some big-ticket tournaments took place in the 22-yard cricket strip, which tested Team India (the senior men's team) to the core. While India continued to dominate in Tests, despite missing out on the coveted WTC title in the inaugural cycle's finale, they were decent in ODIs but had a forgettable campaign in the T20 World Cup in UAE. Talking about Virat Kohli, the 33-year-old had a rather ordinary calendar year with the end quarter turning into a nightmare.

The superstar cricketer, who remains the poster boy of Indian cricket, finished 2021 without being able to lead India to an ICC title and went on to dent his terms with BCCI and the current selection committee in early December. In addition, the right-hander ended without a hundred in international cricket (with his century drought lasting for over two years).

ALSO READ | From conquering Aussies Down Under to T20 World Cup debacle: Team India in 2021

The year started for Kohli with some needless noise on his much-talked about paternity leave. On January 11, Kohli turned proud father as he welcomed his first child, daughter named Vamika, along with wife Anushka Sharma.

Watching India's glorious run in the Australia Tests Down Under by being miles away, Kohli returned to international cricket to take charge in the home Tests versus England. Losing his first Test of the year versus Joe Root & Co., Kohli inspired India's comeback as the hosts romped past the Englishmen in the remainder of the series to win the four-match series 3-1 and book a place in the WTC final.

Kohli, however, ended the series with 172 runs, including two fifty-plus scores, at an average of 28.66.

India then turned to the five T20Is and three ODIs against the same opposition. Facing a competitive Eoin Morgan-led side, India were tested before they won the series 3-2. The then Indian captain Kohli ended with 231 runs (most runs in bilateral T20Is involving Test-playing nations) to be adjudged the Player-of-the-Series.

In the ODIs, Kohli had two good outings with two fifties, but continued to remain away from triple-figure knocks. He, however, led his troops to a 2-1 series win. He was tested to the core as captain in terms of his bowling changes and field settings throughout the series against the ODI World champions.

The IPL 2021 edition was the next assignment for Kohli. Leading the Royal Challengers Bangalore (RCB), the right-hander started the season on a high with back-to-back victories. While RCB did lose the plot to an extend before the COVID-19 second wave halted the tournament, Kohli's numbers with the bat was pretty mediocre with 198 runs at 33 in 7 games. His strike-rate remained below 120 on six outings.

The biggest assignment for Kohli, both as captain and batsman, came when he led India to the WTC final versus New Zealand in Southampton in mid-June. While many termed India as the overwhelming favourites, it seemed as if Kohli would finally be able to break the national side's jinx of not being able to win an ICC title since 2013. However, all hopes were dented as his year remained ordinary.

His returns with the bat were 44 and 13 as India lost convincingly by 8 wickets to lose the marquee title. Thus, the team had no choice but to revamp soon as the second cycle commenced with India's five Tests versus England in the United Kingdom, from August 3.

THE HIGHS AGAINST HOSTS ENGLAND

While India rode on KL Rahul and Rohit Sharma's batting performances, Kohli continued to remain below par despite few good innings. He averaged only 31.14 after the series was interrupted due to Covid crisis in Indian camp after the fourth and penultimate Test.

The action moved to the second and final leg of IPL 2021, in the UAE. Kohli returned to lead RCB after making two massive announcements.

In mid-September, Kohli announced his decision to step aside as the T20I captain. He tweeted saying, "I have been fortunate enough to not only represent India but also lead the Indian Cricket Team to my utmost capability. I thank everyone who has supported me in my journey as the Captain of the Indian Cricket Team."

"I couldn't have done it without them - the boys, the support staff, the selection committee, my coaches, and each and every Indian who prayed for us to win. Understanding workload is a very important thing and considering my immense workload over the last 8-9 years playing all 3 formats and captaining regularly for last 5-6 years, I feel I need to give myself space to be fully ready to lead the Indian Team in Test and ODI Cricket. I have given everything to the Team during my time as T20 Captain and I will continue to do so for the T20 Team as a batsman moving forward."

"Of course, arriving at this decision took a lot of time. After a lot of contemplation and discussions with my close people, Ravi bhai and also Rohit, who have been an essential part of the leadership group, I've decided to step down as the T20 Captain after this T20 World Cup in Dubai in October. I have also spoken to the secretary Mr Jay Shah and the President of BCCI Mr Sourav Ganguly along with all the selectors about the same. I will continue to serve Indian Cricket and the Indian Team to the best of my ability."

Thus, a prolonged dry spell with the bat, bio-bubble restrictions and burden of leading across formats hampered even someone of the statute of King Kohli. It was visible as while his ardent fans always waited for the real Kohli to show up, but he often kept returning with below-par performances as per his standards (For the unversed, vital knocks kept coming from his willow at regular intervals. However, one cannot get content with substandard showings when it comes to the superstar cricketer).

The day IPL 14 resumed, on September 19 in the UAE, Kohli also announced that this will be his last season as RCB captain. He said, "This will be my last IPL as captain of RCB. I’ll continue to be an RCB player till I play my last IPL game. I thank all the RCB fans for believing in me and supporting me."

Virat Kohli to step down from RCB captaincy after #IPL2021

“This will be my last IPL as captain of RCB. I’ll continue to be an RCB player till I play my last IPL game. I thank all the RCB fans for believing in me and supporting me.”: Virat Kohli#PlayBold #WeAreChallengers pic.twitter.com/QSIdCT8QQM

Thus, Kohli entered the IPL final leg with his loyalists hoping for him to sign off on a high as captain; winning RCB and his maiden trophy. Nonetheless, it didn't turn out that way as Bengaluru lost in the Eliminator with Kohli ending the season with 405 runs in 14 games at 119.46.

Post the IPL, Kohli moved to the T20 World Cup, which was to be his last assignment as T20I captain. Needless to say, the countrymen hoped for him to take India to the title and also sign off on a fitting note as the captain in the shortest format. However, Kohli endured back-to-back failures as India bowed out in the Super 12 round, also becoming the first Indian captain to lose a WC clash versus the Men in Green.

Kohli's dubious captaincy calls hogged headlines before India's untimely exit. Meanwhile, he finished with 68 runs in 5 games, with a high-score of 57 and not batting at all on two instances.

While Kohli was on a break during India's home T20Is and first Test versus New Zealand, he returned back to action for the second and final Test against the Black Caps. He led India with aplomb as they achieved their biggest win in terms of runs but once again couldn't break his century-drought, returning with 0 and 36. He has four ducks in Tests in 2021 with one more match to go in the calendar year.

On December 8, BCCI removed Kohli as the ODI captain and appointed Rohit as the limited-overs skipper. While many speculated a rift between the two cricketers, Kohli rubbished all such rumours in an explosive presser before India's departure to South Africa. However, he made some glaring statements, contradicting from the claims made by BCCI chief Sourav Ganguly and a board member.

While Ganguly had claimed that he had requested Kohli to keep the top job in T20Is, as captain, Kohli denied all such claims. Moreover, he also stated that he was always available for the SA ODIs, contrary to statements made by BCCI treasurer Arun Dhamal.

Hence, it has now become BCCI vs Kohli as things have continued to go downhill for the 33-year-old batsman. Overall, 2021 has been a mixed bag for Kohli and he will be tested in the new calendar year as well. After all, he has endured more disappointments than spirited highs.