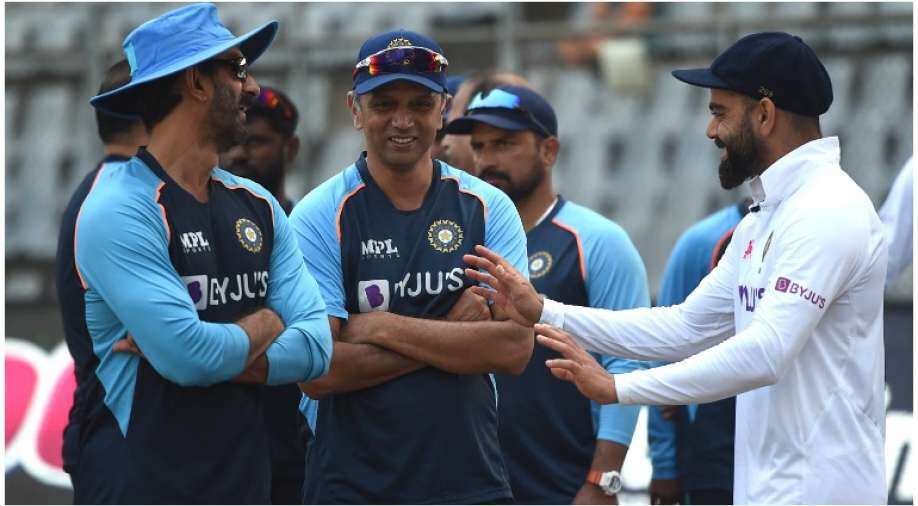 Former Pakistan spinner Danish Kaneria has made a big claim on Virat Kohli-Rahul Dravid and feels the relation between the duo won't be good in the long run.

The Indian men's cricket team has moved on from the Virat Kohli-Ravi Shastri era. After Shastri's tenure ended with the T20 World Cup, Rahul Dravid took over and is now serving as the head coach till the 2023 ODI World Cup. On the other hand, BCCI recently sacked Kohli as the ODI captain, appointing Rohit Sharma as the new limited-overs skipper.

Ahead of India's tour-opener versus South Africa in Centurion, on December 26, former Pakistan spinner Danish Kaneria has made a big claim on the partnership of Kohli-Dravid, who are the captain-coach in the Test format for the national side.

By now, all the cricket fans are well aware of the rusty relations between Kohli and the BCCI post the ODI captaincy switch. After being sacked as the ODI skipper, the 33-year-old Kohli contradicted from BCCI chief Sourav Ganguly's claims, who had earlier stated that he had advised the former to continue as the T20I captain. Kohli also revealed that he had no prior communication with the national selectors before his sacking. Hence, the Indian Test captain's relations with Ganguly has gone down. In 2017, he had a fallout with then head coach Anil Kumble as well. Hence, Kaneria feels his relations with Dravid might also not be good in the long run.

"It's been two years, Virat has not made any century, so he needs to focus on his game. Speaking against legends like Sourav Ganguly and anyone else is not going to help him," Kaneria told IANS in an interview.

He further asserted, "Virat had problems with Anil Kumble, now he has problems with Ganguly. Kumble and Ganguly have proved themselves; they are the real ambassadors of the game. Virat is speaking against Ganguly who has changed Indian cricket and then MS Dhoni took it forward. Now Virat's 90-minute jibe is really not needed at this time."

"He is struggling to make runs in Tests and T20s. And as a captain, he has not won any ICC trophy, so everything is going against him. And now this blame game, I don't think this is going to help him as well as Indian cricket," Kaneria further explained.

Kaneria added, "As far as Rohit Sharma is concerned, he's been an outstanding ambassador of the game; he has won five IPL trophies. His captaincy is impeccable; his camaraderie with Rahul Dravid is amazing. I don't think Virat Kohli's relation with Dravid will be good in the long run. Virat had a problem with Anil Kumble as well. Both Kumble and Dravid are coming from South India and they have big status in cricket. I played against both of them, and I know what kind of intellectuals they are."

It will be interesting to see how the relation between Kohli and Dravid will pan out going forward. At present, the Dravid-Kohli-led Indian team is gearing up for the three-match Test series opener versus Dean Elgar-led South Africa, in Centurion, on Sunday (December 26).