From conquering Aussies Down Under to T20 World Cup debacle: Team India in 2021 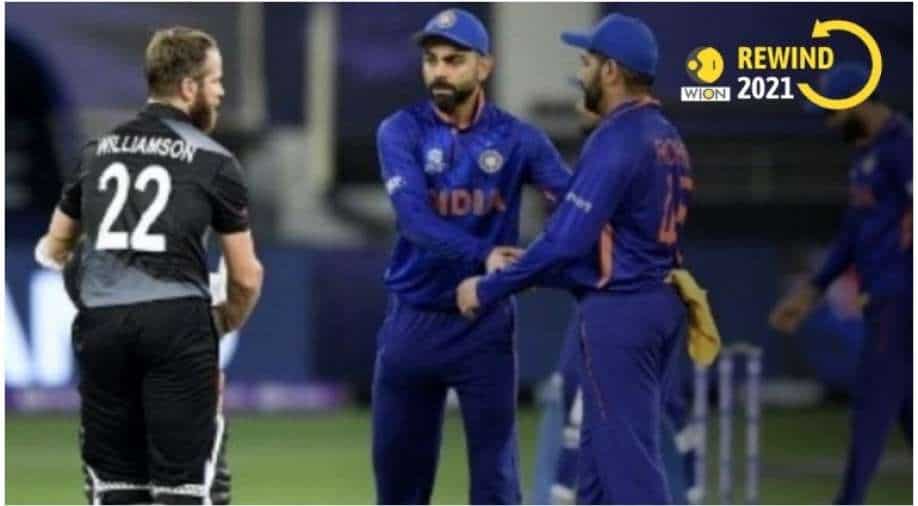 Revisiting Team India's 2021, let us have a look at how Virat Kohli, Rohit Sharma-starrer line-up performed in the calendar year:

The calendar year is coming to an end. The year 2021 was filled with sporting events, mainly due to the Covid-19 pandemic wreaking havoc in early 2020 and postponing many big-ticket tournaments.

Year 2021 had plenty of action on the 22-yard cricket strip. Talking about Team India, the senior men's team had some glorious highs along with two disheartening lows. While the optimists can claim that India maintained their hold in the top-3 in rankings across formats, one reality also remains that national side couldn't end their eight-year-long ICC-title drought.

Revisiting India's 2021, let us have a look at how Virat Kohli, Rohit Sharma-starrer line-up performed in the calendar year:

Conquering all odds Down Under

Ajinkya Rahane-led India managed to draw the 2020/22 Border-Gavaskar Trophy at the halfway stage before 2021 commenced. Coming to the third and penultimate Test, Rishabh Pant's scintillating 97, Cheteshwar Pujara's lengthy stay at the middle and blockathon from R Ashwin-Hanuna Vihari led to the series being wide open, at 1-1, going into the finale at The Gabba, Brisbane.

The fourth and final Test lived upto expectations. Second-stringed India were jolted further with injuries to Ravindra Jadeja, Ashwin, Vihari, Jasprit Bumrah. However, they managed to keep themselves alive on the last day, chasing 328 to break Aussies' proud and unbeaten streak at the venue since 32 years.

Riding on Washington Sundar, Shardul Thakur's fifties in the first essay, Mohammed Siraj's five-fer and Pant-Pujara's fighting knocks in the final innings, India chased down the total with three wickets in hand to win the series 2-1 in a dramatic fashion.

The Test would easily go down as one of the greatest heists pulled off by a second-stringed side in the toughest format.

Soon after the triumph versus the Aussies, India hosted England in an all-format tour of the Three Lions.

Losing the series opener, being in a tough spot in the second Test in Chennai, hearing several criticism around the Ahmedabad pitch, Kohli-led India won the four-match Test series 3-1 to confirm their slot in the inaugural WTC final.

The top-performers for the home side were Ashwin (32 wickets and a ton), Axar Patel (27 wickets in his debut series), Pant and Rohit Sharma's contributions with the willow.

The five T20Is and three ODIs followed suit. The white-ball series was expected to be a tougher assignment for hosts given England's strength in the shorter formats. The T20Is lived upto expectations before India won it 3-2 eventually. The three ODIs saw India go 1-0 up before Morgan-less England turned it around to level it at 1-1. Nonetheless, the series finale was a tough nut to crack for the hosts before finally winning it 2-1.

WTC final - One Where India Never Turned Up

After the England home series, Indian players featured in the IPL 2021 edition, which was cut-short due to the second wave of the Covid-19 pandemic in India. Getting a much-needed breather before WTC final, Team India finally reached the United Kingdom in early June (for WTC final and England Tests).

The ICC World Test Championship (WTC) finale was much-awaited. Entering the final as the No. 1 ranked side, having beaten Australia in their own backyard, India were favourites versus the Black Caps. Nonetheless, India's wait for an ICC title, since 2013, extended as Kane Williamson & Co. produced an all-round performance.

Being asked to bat first, at The Rose Bowl, Southampton, India were 70 for no loss before being bundled out for 217. In reply, NZ were dismissed for 249; gaining a vital 32-run. India had no answers to Tim Southee and Kyle Jamieson's pace, swing and bounce as they were dismissed for 170 in the second innings, setting up a paltry 139-run target.

Kiwis, thus, closed the match with 8 wickets to spare and become the World Test Champions. Agony continued for India in ICC events.

India vs England, five Tests in the UK

After the shambles of the WTC final, India regrouped for the five Tests versus Joe Root-led England. Despite coming so close to the WTC title, India missed out in the final hurdle but had to revamp and start from scratch as the second cycle commenced with the England series.

Kohli-led India were up for the challenge. They came close to winning the five-match Test series opener in Edgbaston before rain washed out entire day five's proceedings. The second Test, at Lord's, brought more luck for India as they won their third Test at the venue, first after seven years, with a comprehensive 151-run margin. Jasprit Bumrah-Mohammed Shami's 89-run unbeaten ninth-wicket stand, KL Rahul's first-innings ton, Mohammed Siraj's eight-wicket haul led to India going 1-0 up despite conceding a 27-run lead.

The third Test was a disaster for the visitors, losing by an innings and 76 runs. The fourth and penultimate Test once again tested Kohli's brigade to the core but they triumphed against all odds. Being asked to bat first, India were dismissed for 190, after reeling at 127-7 at one stage. To add to this, they conceded a 99-run lead before staging a comeback for the ages.

Riding on Rohit's 127 and fifties from Cheteshwar Pujara, Shardul Thakur (twin half-centuries in the match), Rishabh Pant and cameos from the tail, India set up a daunting 368-run target for Root & Co. In reply, the hosts fell like nine pins, for 210, to lose by 151 runs. Thus, England gave an unassailable lead to the tourists.

The fifth and final Test, in Manchester, got cancelled at the last minute due to Covid-19 crisis in the Indian camp. The series decider will be held next year as Team India loyalists are desperately waiting for the national side's first-ever Test series win on English soil since 2007.

After the England Tests and final leg of IPL 2021, in the UAE, the action moved to the Men's T20 World Cup. Starting as one of the strongest contenders, India endured a horrible start. In their opening game, Kohli-led India lost to arch-rivals Pakistan for the first time in World Cup history (both in ODIs and T20Is). Losing by ten wickets, India had a herculean task to stage a comeback.

Nonetheless, more embarrassment awaited the one-time winners. India's losing streak versus New Zealand in ICC events, since 2007, continued as they were hammered by the Black Caps in their second outing. Starring on the brink of an early exit, India gathered themselves to pull off three convincing wins, however, the writing was on the wall long back.

India failed to move past the group stages with three wins from five encounters. Winning against the likes of Afghanistan, Scotland and Namibia didn't matter as the Pakistan and New Zealand encounters dented India's campaign severely.

Post the disheartening T20 WC, India began a new era under Rahul Dravid. After much hesitation, Dravid replaced Ravi Shastri to become India's head coach as the former all-rounder's tenure ended with the T20 WC campaign. In addition, Kohli stepped aside as the Indian captain in T20Is -- having made the official announcement prior to the mega event -- and was replaced by Rohit.

It wasn't going to be easy versus the World Test champions. Hence, Williamson-led Kiwis held onto a fighting draw in the series opener, which saw Ajinkya Rahane leading the side in Kohli's absence. The second and final Test brought Kohli back in action as the hosts humbled the visitors at the Wankhede Stadium, Mumbai.

India still have a Test left in the calendar year. They are scheduled to tour South Africa, comprising three Tests and ODIs each, but the tour-opener will commence on December 26 with the first Test at Centurion.

ALSO READ | A new era! 3 reasons why Rohit Sharma's appointment as ODI captain can be a good move for Team India

Overall, India had a topsy-turvy ride in 2021. While they continued to remain a solid unit across formats, they particularly flourished in bilateral series as an ICC title continues to evade them. Young stars such as Prasidh Krishna, Mohammed Siraj, Ishan Kishan, Pant, etc. made a mark whereas KL Rahul rose in prominence and stature. Kohli lost limited-overs captaincy altogether as Rohit-Dravid-era has commenced in the white-ball formats.

Team India will hope to continue their dominance at home and conquer more Test series away from home. However, their biggest aim would be to end their eight-year-long ICC-title drought.