A new era! 3 reasons why Rohit Sharma's appointment as ODI captain can be a good move for Team India 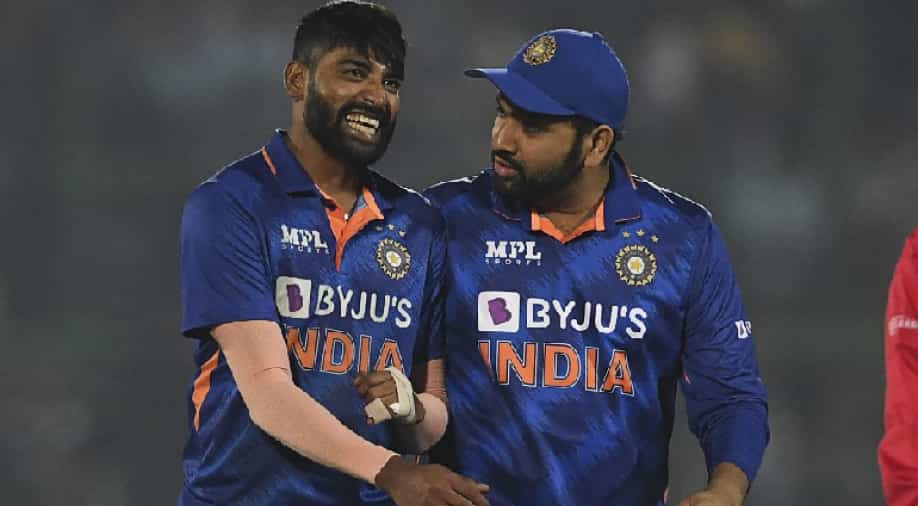 Rohit Sharma leading India in whtite-ball cricket can be a good move for the team going forward. Photograph:( AFP )

The Indian team will kick-start a new era under white-ball captain Rohit Sharma with the upcoming ODI series against South Africa. Here is a look a three reasons why Rohit taking over ODI captaincy can prove to be a masterstroke for the Indian team.

The Board of control for cricket in India (BCCI) on Wednesday confirmed Rohit Sharma's appointment as India's new captain in ODIs, replacing Virat Kohli. The announcement came as a surprise to many with reports even claiming that Kohli didn't want to give up captaincy and was given an ultimatum of 48 hours to step down voluntarily but he didn't.

In the aftermath of the decision, reactions have been pouring in continuously from all corners with several former cricketers and experts sharing their two cents. The decision can pretty much shape up Team India's white-ball future in the next few years with a T20 World Cup and an ODI World Cup lined up to be played in the next two years.

While many had seen it coming, what surprised them was the way in which the decision was conveyed to Kohli and the fans of the Indian team. Without any explanations from the selectors, the press release simply stated that the Chetan Sharma-led panel has decided to hand over ODI captaincy to Rohit going forward.

While the jury is still out on whether the decision is the right one looking forward since Rohit is 34 and doesn't have too many years of cricket left in him at the top level, here we take a look at three reasons why his appointment might prove to be a masterstroke for the Indian team.

Virat Kohli is one of the best batters of the current era and perhaps one of the greatest of all time. His consistency is immaculate and his hunger for success is unmatchable. However, in the past couple of years, Kohli has been far from his best and has struggled to match his own standards when it comes to batting.

He has been a pale shadow of himself across formats and has not scored a century for over two years now. Reliving him completely off the pressure of captaincy can help in reigniting the fire in the run-machine. It might help Kohli return to the top of his game and pile on runs at the consistency he is known for.

Rohit Sharma has been phenomenal as a captain for Mumbai Indians in the Indian Premier League (IPL) and has a great record as captain of the Indian team in a handful of matches in white-ball cricket. Rohit is the most successful skipper in the history of IPL with five titles to his name compared to Kohli's none.

He has led India in ten ODIs so far, winning eight and losing just two games. He had led the team to an Asia Cup triumph in 2018 - India's only major trophy under Ravi Shastri as the head coach of the team. In T20Is, Rohit has led the team in 22 T20Is and has 18 wins to his name as captain.

He has also proven time and again in the IPL that he is a great tactician and a calm head under pressure situations which are some qualities that can help him succeed as India's new white-ball skipper.

3) No split captaincy for India

A number of successful teams in modern-day cricket have approached Tests and white-ball formats separately with different teams and different captains in charge for the two formats. However, most teams have kept things simple when it comes to just white-ball cricket.

Australia and England both have different personnel and captain for Tests but have one captain leading the side in both ODIs and T20Is. If anything, having one captain in charge of the team in the two formats helps in maintaining stability and keeping things simple to avoid confusion going ahead in selection matters and the brand of cricket the team wants to play among others.