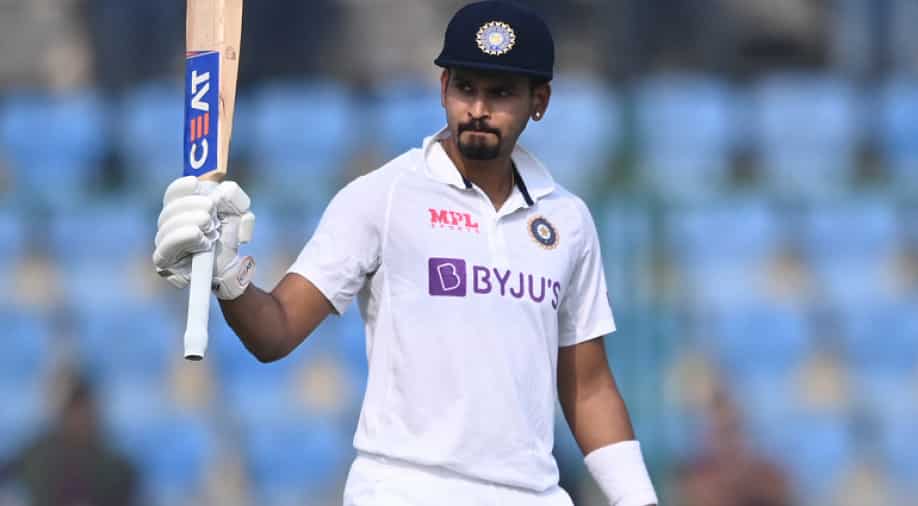 India batter Shreyas Iyer created history on his Test debut as he followed up his stunning century with a half-century in India's second innings of the first Test against New Zealand on Sunday.

India batter Shreyas Iyer continued his purple patch on his Test debut against New Zealand on Day 4 of the ongoing series-opener between the two sides in Kanpur on Sunday.  Iyer scripted history with the bat as he became the first Indian to score a century and a half-century in his debut Test match.

The right-hander came out to bat at no.5 when India were reeling at 45/3 having lost both Cheteshwar Pujara and Ajinkya Rahane in quick succession before Mayank Agarwal was sent packing quickly as well. Iyer survived an early scare as a thick edge against Tim Southee saw the ball landing in no man's land.

Iyer went on to make the most of the opportunity and slammed a brilliant half-century under pressure to bail India out of trouble and help them stage a comeback in the game.

With his maiden half-century in Tests, Iyer scripted a massive feat as he became the first Indian with a ton and a fifty on Test debut. He became the tenth batter overall in the world to achieve the stellar feat. He also joined the legendary Sunil Gavaskar in an elite list by becoming the third Indian with two fifty-plus scores on Test debut.

Gavaskar had notched up 65 and 67 on his Test debut against West Indies in 1971 while Dilawar Hussain was the first Indian to achieve the feat when he scored 59 and 57 respectively in the two innings of his debut Test against England in 1933-34.

Incidentally, Iyer had received his maiden Test cap from batting legend Gavaskar himself before the start of the Test match on Thursday and did well to join an elite list featuring him with his ton and half-century on debut. Iyer's 65-run-knock helped India stretch their lead past the 200-run mark and get into a comfortable position against the visitors after a top-order collapse.

Saha and Axar Patel are currently out in the middle for India as the hosts look to take their lead close to 300 runs before inviting New Zealand to bat in their second innings of the game.