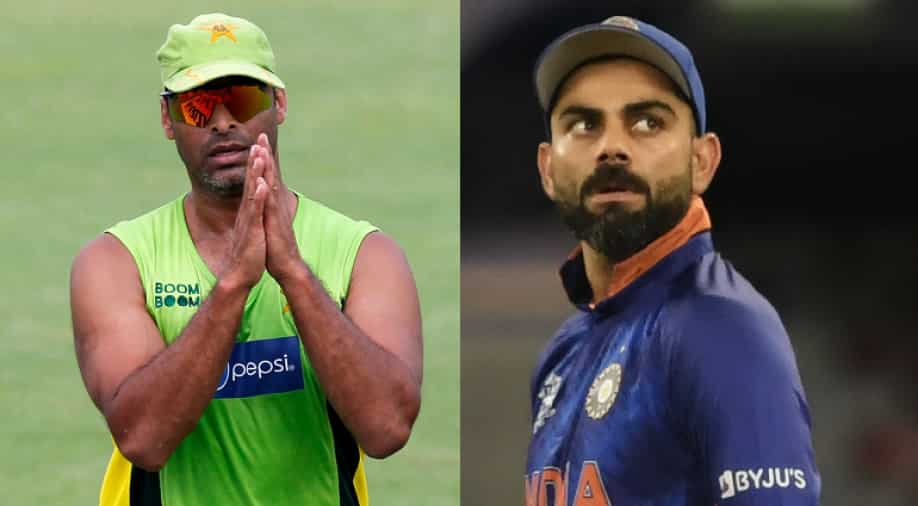 Shoaib Akhtar has made a bizarre statement about Virat Kohli. Photograph:( AFP )

Former Pakistan pacer Shoaib Akhtar recently made a bizarre statement about Virat Kohli, suggesting that the Indian cricketer should not have gotten married so early.

Former Pakistan pacer Shoaib Akhtar is known for his controversial comments and outspoken nature. He has often found himself in the centre of controversy over his comments. Akhtar recently made a bizarre statement on former Indian captain Virat Kohli while speaking about his ongoing rough patch in international cricket and his decision to quit as India's Test captain.

Kohli, who is regarded as one of the best batters of the current era, has not been on top of his game for a while now and has struggled to match the standards he has set for himself with his consistent performances in the past. The batting maestro has not scored an international century since 2019 and has been looking to bring an end to the long-standing sought.

Kohli had left India's T20I captaincy last year before being replaced as the ODI captain of the team by Rohit Sharma. He quit as the Test captain of the Indian team earlier this month and is now playing as a pure batter for the national side. Akhtar made a bizarre comment on Kohli's recent struggles suggesting that he shouldn't have gotten married so early in his career.

Akhtar said he would never have married had he been in Kohli's place ad that the pressure of marriage and family can take a toll on a player's performance for his team.

"Virat captained for 6-7 years and I was never in favour of his captaincy, I just wanted him to keep scoring 100-120 runs and keep the focus on his batting," Akhtar said speaking to Dainik Jagran.

"I would have not even married if I were in his place. I had just scored runs and enjoyed cricket, these 10-12 years of cricket are different time and doesn't come again, I am not saying getting married is wrong but If you are playing for India, you would have enjoyed a time a little. fans are crazy about Kohli and he had to maintain that love he is getting for the last 20 years," he added.

Akhtar explained how a cricketer has a very short career span and their peak years can be anywhere between 5 to 6. The former Pakistan pacer claimed Kohli's peak has passed already and that now he will have to struggle to continue producing consistent performances for his team.

"Absolutely it does [the pressure of marriage, captaincy affect cricket]. There is pressure from the children, of the family. As the responsibility increases, so does the pressure. Cricketers have a short career span of 14-15 years in which you stay at the peak for five-six years. Those years of Virat have passed, now he has to struggle," said Akhtar.

Kohli had tied the knot with Bollywood star Anushka Sharma in the year 2017. The star couple was blessed with a daughter in January last year. Kohli's on-field performances remained top-notch even after his marriage and the Indian captain continues to be one of the best batters in the world at present despite having struggled for consistency in the last couple of years.