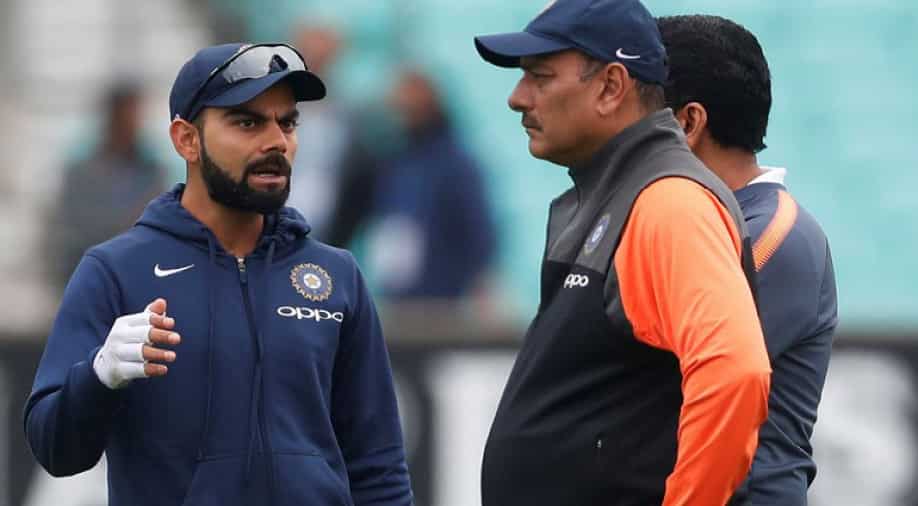 Former India head coach Ravi Shastri has aimed a dig at Virat Kohli's critics after the latter's decision to step down as the Test captain of the Indian team.

Former India head coach Ravi Shastri has taken a dig at Virat Kohli's critics after the latter's decision to quit as India's Test captain. Kohli announced his resignation as the Test captain of the Indian team last week, a day after India's 2-1 loss in the Test series against South Africa away from home.

Kohli's decision came as a shock to many as he had expressed his desire to continue leading the Indian team in Tests and ODIs while stepping down as T20I captain in September last year. However, he was later sacked as ODI captain as the selectors wanted Rohit Sharma to lead the team in both white-ball formats. Kohli then had a public fallout with the BCCI after an explosive presser in December last year before quitting Test captaincy last week.

Shastri said Kohli could have easily led the Indian team in Tests for at least another two years but some people might not have been able to digest the fact that he could have reached 50-60  wins as captain. Kohli is the most successful Indian captain in Test history with 40 wins from 68 matches as the skipper of the side.

"Whether Virat could have continued to lead India in Tests. For sure, he could have led India for at least 2 years because next two years India would be playing at home and who is coming over - 9 and 10 jacks, going by the rankings. But he would have then made it to 50-60 wins under his captaincy and a lot of people will not be able to digest that fact," Shastri was quoted as saying by India Today.

"Two years, he could have carried on but we should respect his decision. In any other country, this kind of record is incredible. You won against Australia, England and lost 1-2 to South Africa but still, there are debates if he should be the captain or not," he added.

Also Read: 'There are people against him': Shoaib Akhtar on Virat Kohli's decision to quit India's Test captaincy

Kohli enjoyed a great relationship with Shastri during his tenure as the head coach of the Indian team and the duo inspired India to several memorable Test wins both at home and away from home. India dominated the top spot in the ICC Test rankings for years under the duo's leadership and were a force to reckon with in the longest format.

Talking about Kohli's decision to quit Test captaincy, Shastri said the batting maestro might have felt the need to take some pressure off his back and focus only on his personal game. Shastri said it was an individual decision as Kohli must have felt he has already achieved what he wanted to as the captain of the Test team.

Also Read: Harbhajan Singh issues warning to Virat Kohli: 'When you are captain you don't worry about selection'

"Virat Kohli led India in 5-6 years in Tests and out of those, five years India was no. 1. No Indian captain has this kind of record and there are only a handful of captains world over with this kind of record. So when the most successful captain decides to step down as captain it's an individual's decision because his record of 40 wins is unprecedented," said Shastri.

"So he only knows how much is he enjoying captaincy. When Sachin Tendulkar and MS Dhoni were not enjoying captaincy, they left. Similarly, when Virat thought that he had won 40 matches, six years he had been leading and now he wants to enjoy his cricket. He wants to focus on his batting and release a bit of pressure and it happens with a lot of individuals," he added.