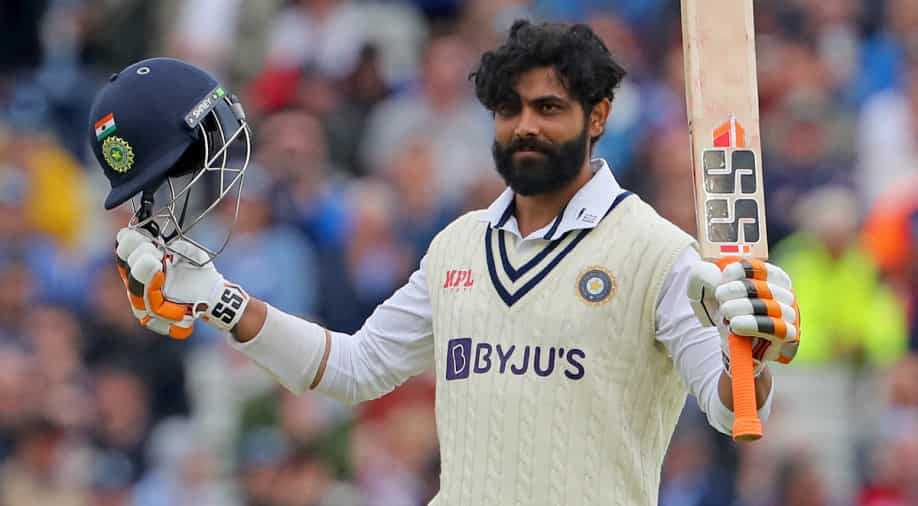 Ravindra Jadeja slammed a terrific century against England in the ongoing Edgbaston Test. The left-hander was hailed by many for his maiden ton overseas in the longest format.

Star India all-rounder Ravindra Jadeja notched up his maiden Test century overseas on Day 2 of the ongoing rescheduled fifth Test between India and England at Edgbaston in Birmingham on Saturday (July 02). Jadeja slammed a brilliant knock of 104 runs off 194 balls and combined with centurion Rishabh Pant (146) to help India post a strong total of 416 runs on the board in their first innings.

India got off to a disastrous start after being asked to bat first by England in the all-important first Test. The visitors were reduced to 98/5 inside 28 overs before Pant and Jadeja joined forces to post a staggering 222-run stand for the sixth wicket. While Pant slammed a stunning 146 off 111 balls laced with 20 fours and 4 sixes, Jadeja smashed 13 fours en route to his 104-run knock.

While Pant was dismissed on 146 on Day 1 of the Test match, Jadeja remained unbeaten on 89 and went on to complete his hundred in the first session on Day 2. It was Jadeja's first-ever Test century overseas and the third hundred overall in his career in the whites.

The left-hander was lauded by many for his terrific knock as the likes of Sachin Tendulkar, Harbhajan Singh and Wasim Jaffer among others took to Twitter to heap praise on the all-rounder, who has been a much-improved batter in the last few years.

Here's how Twitter lauded Ravindra Jadeja for his terrific ton against England:

Averaging 38 with the bat and 24 with the ball in Test cricket after 60 test matches, arguably one of the greatest spin bowling all-rounder to have played the game, Ravindra Jadeja. An outstanding 100 this.

Played Jadeja. The joy on the face of his team mates said it all.

After Jadeja's departure on 375/9 on Day 2, India's stand-in skipper Jasprit Bumrah took charge and went after England pacer Stuart Broad towards the end of the visitors' innings. Bumrah got 35 runs off the over from Broad to create the record for most runs scored in a single over in Test cricket.

29 runs off the 35 that came from the over were scored from Bumrah's bat while 6 runs came in the over from bye. With the help of centuries from Pant and Jadeja along with the cameo from Bumrah, India posted a strong total of 416 runs on the board and will be hoping to amass a healthy lead by bundling out the hosts cheaply in their first innings.