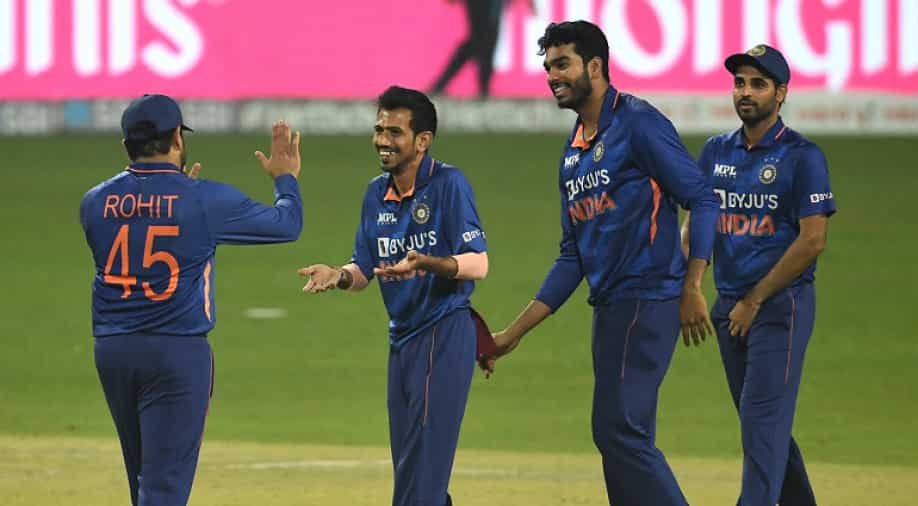 India will lok to register a 3-0 clean sweep against West Indies on Sunday. Photograph:( AFP )

Ruturaj Gaikwad might finally get a chance to open for India in the ongoing T20I series against West Indies after average performances from Ishan Kishan in the first two matches. Here is a look at India's predicted playing XI for the 3rd T20I against Kieron Pollard's men.

India survived a last-over scare from Rovman Powell to secure a thrilling 8-run win in the second T20I of the ongoing three-match series to take an unassailable lead of 2-0. India will be aiming for a 3-0 clean sweep when they lock horns with Kieron Pollard & Co. in the third and final T20I of the series at the Eden Gardens in Kolkata on Sunday (February 20).

If India manage to continue their stellar winning run in the third T20I on Sunday, it will be the second successive T20I series clean sweep for the hosts, who had defeated New Zealand 3-0 at home post the conclusion of the T20 World Cup 2021 last year. India have been enjoying a brilliant run under captain Rohit Sharma and will be hopeful of making it three wins in a row on Sunday.

However, the hosts are set to be without Virat Kohli and Rishabh Pant in the final encounter. Both Kohli and Pant were the heroes of India's victory in the second game as they slammed a half-century apiece to help the Men in Blue post a challenging total of 186 runs on the board. Kohli and Pant left the team's bio-bubble and have been given a ten-day break by the BCCI.

The duo will also miss the upcoming T20I series against Sri Lanka which is set to get underway from February 24. In the absence of the duo, India are likely to bring Shreyas Iyer back in the playing XI. Iyer, who is yet to feature in the ongoing T20I series, can take Kohli's no.3 spot in the batting line-up. Talented opener Ruturaj Gaikwad also might finally get a chance to break into the XI.

Gaikwad is part of the squad but is yet to get a chance in the series and he might open with captain Rohit Sharma in the 3rd T20I on Sunday. Ishan Kishan, who has had average outings as an opener in the first two games, might be asked to take Pant's spot in the middle-order and keep wickets in his absence.

All-rounder Deepak Hooda might also make his T20I debut in case India want to add another all-rounder in the XI to have extra batting and bowling depth in the final game of the series. Hooda, who impressed in the ODI series against the West Indies, is yet to play his first T20I for India.