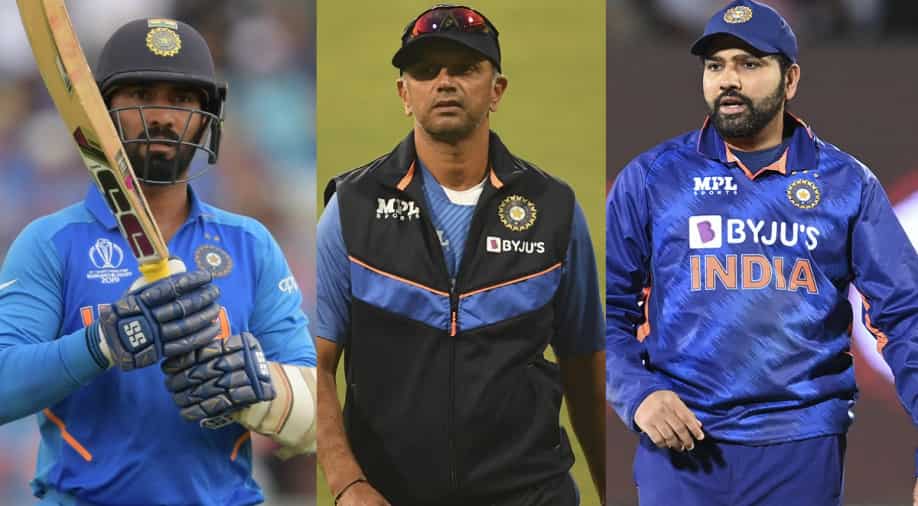 India head coach Rahul Dravid addressed the pre-match press conference ahead of the first T20I of the five-match series between India and South Africa at the Arun Jaitely Stadium in New Delhi on Tuesday.

Indian cricket team's head coach Rahul Dravid explained why it was important for captain Rohit Sharma to take a break from the team's upcoming T20I series against South Africa at home. Some experts felt Rohit should have continued playing following the recently-concluded Indian Premier League (IPL) 2022 and have led the side in the five T20Is against the Proteas. Rohit has been rested from the T20I series along with other senior players like Virat Kohli, Jasprit Bumrah and Mohammed Shami.

The Indian players will be returning to action for the first time since the conclusion of IPL 2022 on May 29. The members of the squad got a short break in between before assembling in New Delhi for the series-opener at the Arun Jaitely Stadium on Thursday (June 09). In Rohit's absence, KL Rahul will be leading the side against Temba Bavuma's men.

Explaining why it was crucial for Rohit to get a break, Dravid said the Indian skipper is an all-format player and needs to be provided adequate rest to ensure he is fit and fresh for the challenges ahead. The Indian head coach insisted there will be times when the team will have to rest their best players for a particular series to manage their workload.

“Rohit is our all-format player. It would be unwise to expect everyone to be available all the time. We want them to be fit and fresh as well. There would be times where we would have to rest our big players," Dravid responded to a reporter's query on Rohit at the presser on Tuesday.

Also Read: Not Sachin or Dhoni! Hardik names his favourite cricketer, says always placed him above other legends

Veteran wicket-keeper batter Dinesh Karthik managed to make a comeback to the Indian team after a long gap of three years on the back of his performances for the Royal Challengers Bangalore (RCB) in the recently-concluded IPL 2022. Karthik was phenomenal as a finisher for his team and played a number of crucial knocks down the order.

The veteran batter went on to amass 330 runs in 16 matches at an average of 55 and a brilliant strike rate of 183.33 to impress the selectors and make his return to the Indian team. He last featured for India during the ODI World Cup in 2019. When asked about his return, Dravid said Karthik will have a very clear role in the team of finishing games while batting down the order.

"With Dinesh, it is clear with the role. At the backend of the game, he can make a difference. That's why he has been picked, to bat in those positions and deliver for India as well," said Dravid.

India will lock horns with South Africa in the first T20I in Delhi on Thursday before moving to Cuttack for the second game on Sunday (June 12). The next three matches will be played in Vizag, Rajkot and Bengaluru respectively. India are currently on an 11-match unbeaten streak in T20Is and will hope to keep the winning streak intact on Thursday.