Not Sachin or Dhoni! Hardik Pandya names his favourite cricketer, says always placed him above other legends 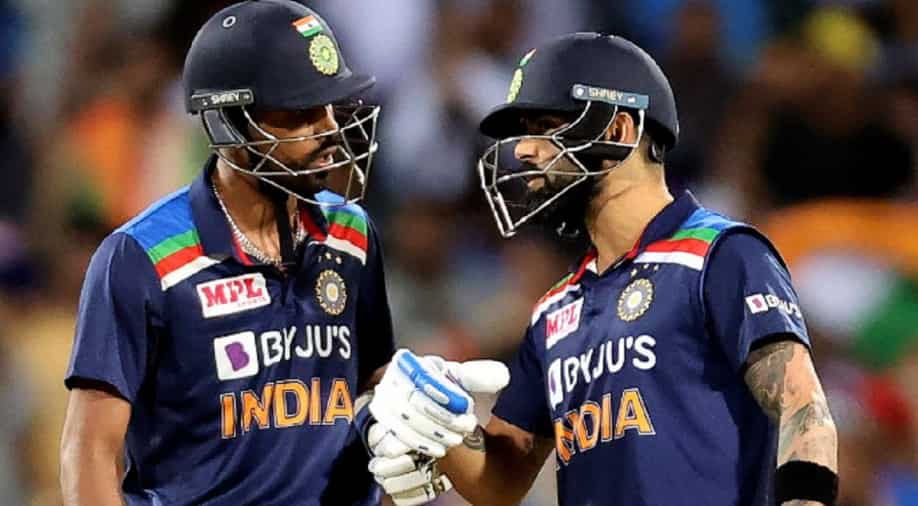 Hardik Pandya said Virat Kohli was among the players he liked. Photograph:( AFP )

Star India all-rounder snubbed the likes of legendary Sachin Tendulkar, MS Dhoni and Virat Kohli as he revealed the name of his favourite cricketer growing up.

Star all-rounder Hardik Pandya is all set to make his comeback to the Indian team after a stellar Indian Premier League (IPL) season with his new team Gujarat Titans (GT). IPL 2022 was a memorable season for Hardik and the Titans as he led the debutants to their maiden IPL title in their first-ever campaign in the league. Gujarat Titans defeated Rajasthan Royals comprehensively in the final to win the elusive trophy.

Hardik led from the front both as a player and a captain and played an instrumental role in his side's memorable triumph. He was the highest run-getter for the Titans last season with 487 runs in 15 matches at an average of 44.27 and a strike rate of 131.26. Hardik also stepped up with the ball when required and picked up 8 wickets for his team in IPL 2022.

Ahead of his comeback for Team India after a long spell on the sidelines, Hardik spoke about his love for cricket growing up and revealed who was his favourite cricketer. While he liked the legendary Sachin Tendulkar, Jacques Kallis and Virat Kohli among others, Hardik said his favourite was former India batter Wasim Jaffer.

Known for his elegant batting, Jaffer played 31 Test matches for India and amassed 1944 runs at an average of 34.10, including 5 centuries and 11 fifties. He was a mainstay in the Indian top-order for a few years under Sourav Ganguly's captaincy. Hardik revealed he always placed Jaffer above the other legends and also tried to copy his technique.

"Like everyone, I had favourite cricketers. I liked Jacques Kallis, Virat, Sachin sir. There are so many greats that you can't pick. My favourite cricketer was actually Wasim Jaffer. I used to love watching him bat. Someone I always placed him above other legends. Somehow, I used to copy his batting, but I was never able to get his class," Hardik said speaking on the SG Podcast.

Also Read: Dhoni told me I will be in World Cup squad after 3 matches: Hardik Pandya recalls his Team India debut

Hardik also revealed he grew up playing cricket with his brother Krunal Pandya and the duo always strived to help each other improve but never had any rivalry in between them. Hardik and Krunal also played cricket at different age levels. They joined Mumbai Indians in the IPL where they got much-deserved opportunities and recognition for their splendid performances.

"Krunal and I were completely different cricketers. He was a left-handed batter who could bowl while I used to bowl leg spin and bat right-handed. He used to bat at 4-5 and I used to bat at No. 3. We never had a rivalry because our roles were always different. I used to play Under-16, he played Under-19. But we were there for each other so make sure we improve in all departments," said Hardik.