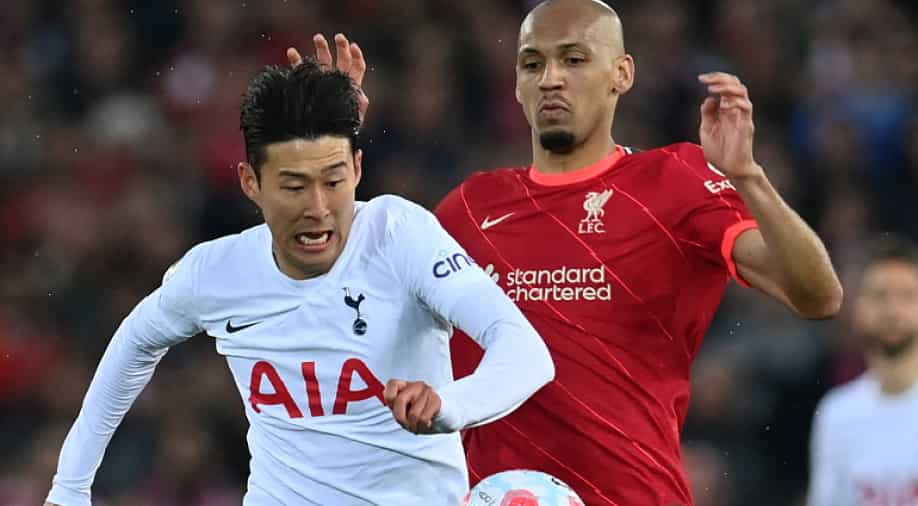 Liverpool's title hopes have been dealt a blow after draw against Spurs. Photograph:( AFP )

Liverpool's title hopes were handed a huge blow after their 1-1 draw against Tottenham Hotspur in the Premier League on Sunday. Brighton thrashed Manchester United 4-0.

What had been a joyous week for Liverpool went flat on Saturday as they stumbled in the title race, dropping two crucial points in a 1-1 draw at home to Tottenham Hotspur. Watford were relegated from the top flight as they lost to Crystal Palace, while Manchester United`s season can hardly end soon enough after a 4-0 hammering by Brighton and Hove Albion.

Liverpool reached the Champions League final on Tuesday with victory over Villarreal but the mood was gloomy as they were unable to ratchet up the pressure on Manchester City at Anfield.

They had won their last 12 Premier League home games and were unbeaten at Anfield in the league for 14 months but trailed to Son Heung-min`s 56th-minute goal.

Son`s 20th league goal of the season looked like earning Tottenham the win they needed to move fourth but Luis Diaz equalised with a deflected shot in the 74th minute.

Liverpool moved top with 83 points from 35 games with City also on 83 from 34 games. Reigning champions City can go three points clear if they beat Newcastle United on Sunday.

"The dressing room is not flying, come on, but there are other games to play. We just have to keep going," Liverpool manager Juergen Klopp said.

Manchester United`s soon-to-be-ex interim manager Ralf Rangnick apologised after a display he described as "humiliating" on the south coast. Moises Caicedo, Marc Cucurella, Pascal Gross and Leandro Trossard were all on target for Brighton as United suffered a fifth successive away defeat in the league to end any remaining hope of a top-four finish.

"It was a terrible performance. From the first until the last minute it was not enough. We can only apologise for this performance and a humiliating defeat," said Rangnick, who will hand over to Erik ten Hag at the end of the season.

Burnley`s resurgence, which had seen them escape the relegation zone, came to a halt as they lost 3-1 at home to Aston Villa for whom Danny Ings, Emiliano Buendia and Ollie Watkins were all on the scoresheet.

Burnley are in 16th place with 34 points but 18th-placed Everton have 32 points with two games more to play.
Chelsea are not yet assured of a top-four place as they were held to a 2-2 home draw by Wolverhampton Wanderers.

With potential new owner Ted Boehly watching at Stamford Bridge, Romelu Lukaku scored twice to put the hosts ahead. But Francisco Trincao scored a spectacular goal 11 minutes from time before Conor Coady headed a dramatic 97th-minute equaliser to deny Chelsea victory on the day the sale of the club was agreed.

Chelsea are in third place with 67 points from 35 games with fourth-placed Arsenal, who host relegation-threatened Leeds United on Sunday, on 63 from 34. Tottenham have 62 from 35.

"Of course the taste of the game is bad," Chelsea captain Cesar Azpilicueta said. "We are conceding too many goals in the last couple of games which is putting us in a difficult position in the race for the Champions League."

Brentford are ending their maiden Premier League season on a high as they crushed Southampton 3-0 to virtually guarantee survival, barring an unlikely sequence of results.