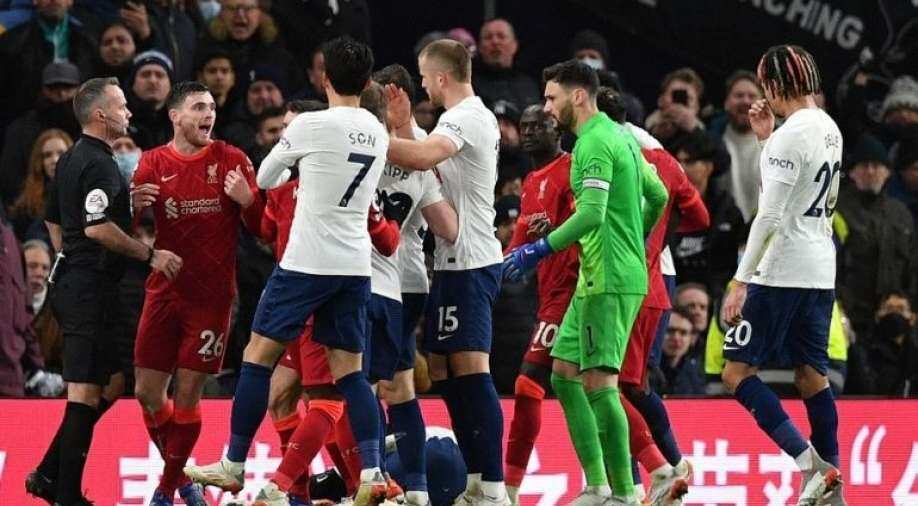 Klopp's side recovered from Harry Kane's early strike to move in front thanks to goals from Diogo Jota and Andrew Robertson.

Liverpool held on for a point despite having to play the final 13 minutes with 10 men following Robertson's dismissal for an ugly hack on Emerson Royal.

Klopp was booked after protesting over two key Tierney decisions, insisting Kane should have been sent off and Jota deserved a penalty.

The German took aim at Tierney in a post-match blast, saying: "I have no idea what his problem is with me.

"I was a bit more emotional in the game. I'd have preferred the right decisions on the pitch.

"Kane was definitely a red card. For the penalty, the referee told me he thinks Jota stops on purpose. It is incredible.

"He had the best spot on the pitch and doesn't give it. You will have to ask him what his problem is with me."

For the first time in four years, Liverpool won't be top of the Premier League table on Christmas Day.

The Reds are three points behind leaders Manchester City, who thrashed Newcastle 4-0 earlier on Sunday.

After winning their previous eight games in all competitions, Liverpool once again left London frustrated having lost at West Ham and drawn at Brentford this term.

The pulsating encounter was a welcome antidote to the coronavirus mayhem which has engulfed the Premier League, with six games postponed this weekend.

Amid calls for the Christmas programme to be postponed to stem the virus spread, Klopp said: "We play now on Wednesday, Sunday and Tuesday. That is impossible.

"We do not have the players. We could maybe have another case or two. We have to think about it, we cannot just push it all through. If we don't play any more and have a break I am fine."

Tottenham had been hit the hardest by Covid, with Liverpool's visit their first game in a fortnight after matches against Rennes, Brighton and Leicester were postponed.

Nine of Antonio Conte's squad contracted the virus and some of them remain in isolation.

Liverpool weren't immune either and, just hours before kick-off, Thiago Alcantara tested positive, while Jordan Henderson was sidelined by a non-Covid illness.

Racing onto Tanguy Ndombele's pin-point pass into the Liverpool area, Kane guided a clinical finish into the far corner in the 13th minute.

It was only Kane's second Premier League goal of a difficult season for the England captain.

A feisty affair grew more heated after Kane was only booked for a studs-up foul on Robertson that could easily have been a red card.

Liverpool equalised in the 35th minute as Robertson darted into the area and clipped a precise cross towards Jota, who powered a header past Hugo Lloris for his 11th club goal of the season.

Jota appealed in vain for a penalty moments later, going down under heavy contact from Emerson.

Seconds after Trent Alexander-Arnold's push on Dele Alli failed to yield a Tottenham penalty, the right-back popped up with a driven cross that Robertson headed home from close-range in the 69th minute.

But Alisson's rush of blood gifted Tottenham a point five minutes later when he charged out of his area and missed Winks' pass, leaving Son with the simple task of slotting into the empty net.

Robertson became the first Liverpool player to be sent off in 113 games in the 77th minute.

Initially booked for his foul on Emerson, Robertson saw red after Tierney changed his decision following a VAR check.