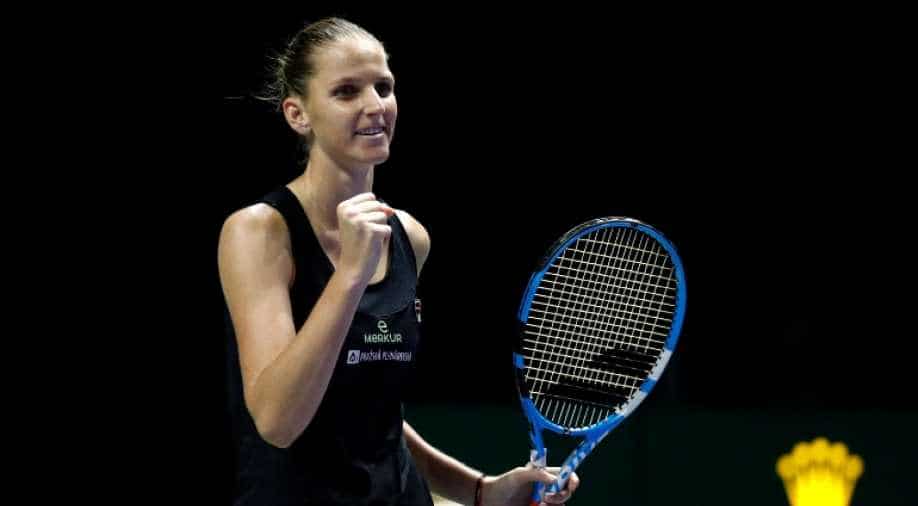 Pliskova's 6-3 6-4 victory meant she completed her White Group play with a 2-1 record to advance to the semi-finals of the eight-woman tournament for the second year in a row.

Karolina Pliskova said patience was the key as she secured a first victory over fellow Czech Petra Kvitova to claim a place in the WTA Finals last four on Thursday.

Pliskova's 6-3 6-4 victory meant she completed her White Group play with a 2-1 record to advance to the semi-finals of the eight-woman tournament for the second year in a row.

A naturally-attacking player, Pliskova said the advice from her coach Rennae Stubbs to "stay disciplined" towards the end of the first set had paid off as she curbed her aggression to snuff out Kvitova's attempt at a comeback.

"Rennae said, 'Look, you both want to hit winners, but it's not really only about the winners today. So she can make more mistakes than you'" Pliskova told reporters.

"So that was the mentality today. I think that worked well, because I just didn't want to hit 20 winners.

"I did not want to be not passive, actually, but patient and I believe I was happy when I was in the rally. So I felt like I had a good chance to win all those rallies."

Pliskova, who had lost her first three matches against fellow left-hander Kvitova, said she had learned her lesson quickly after dropping her serve twice.

"I was just not serving that well, and not serving as clever as I can," she told reporters.

"So I just tried to mix a little bit and it was much better, because she started to hit the ball well after the first set, started to be more loose, so of course she has the ability to hit some winners, some good shots and good returns."

Pliskova's steady approach enabled her to profit from the stream of errors from across the net. Kvitova racked up 32 unforced errors, nearly double Pliskova's total.

"So I just tried to move her around and change the speed. I just believed I have the weapons which can work against her, and I felt better on this surface than her.

"She was missing a lot. There was no reason to panic and no reason why I should be, like, overplaying or missing too much."

'I know how to fix it:' Nadal stunned in Rome before French Open title defence

Guardiola must rise to challenge as Man City chase Liverpool