'Played long enough with him...' - Gambhir feels Dhoni had no role behind India's knee-jerk changes vs NZ 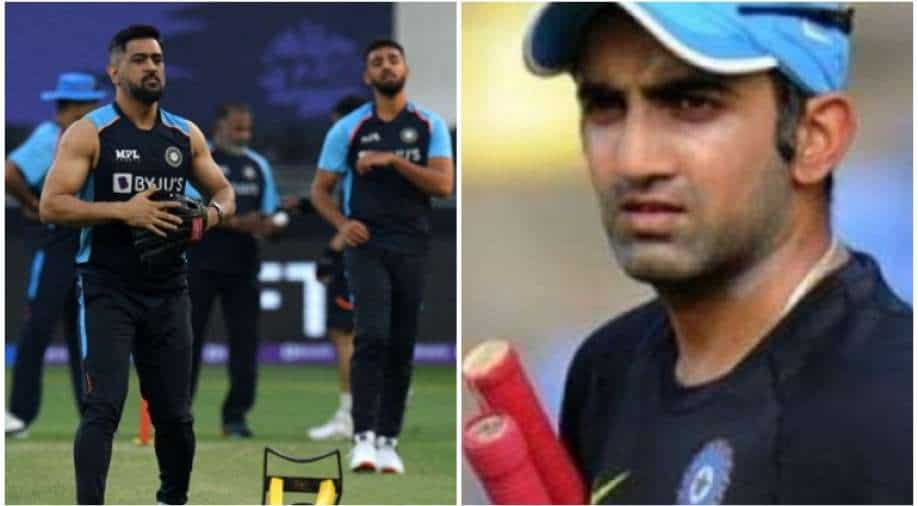 Gautam Gambhir feels mentor MS Dhoni had no role in India's knee-jerk changes in their game versus New Zealand during the T20 World Cup 2021 edition.

India played their second game in the Super 12 round in the T20 World Cup 2021 edition against Kane Williamson-led New Zealand, on Sunday (October 31) at the Dubai International Cricket Stadium, Dubai. After losing their tournament-opener versus arch-rivals Pakistan by ten wickets, the Virat Kohli-led Men in Blue were expected to comeback in style and get off the mark in the points table.

However, nothing of that sort happened as Kohli & Co. lost their second game on the trot, by eight wickets versus the Black Caps. Being asked to bat first, India posted a below-par 110-7 in 20 overs. In reply, the Kiwis completed the run-chase with 33 balls in hand and pushed the one-time winners are on the brink of an early exit from the mega event.

While nothing has clicked for India in the two games in the T20 WC, many former cricketers and experts of the gentlemen's game has slammed the Kohli-led thinktank for their questionable changes in the playing XI versus New Zealand. Ishan Kishan came in place of injured Suryakumar Yadav and was asked to open as Rohit was demoted to No. 3 whereas Kohli also moved a spot below his usual position. Meanwhile, Bhuvneshwar Kumar was replaced by Shardul Thakur.

Many feel India pressed the panic button after one loss. Former Indian opener-turned-commentator Gautam Gambhir feels mentor MS Dhoni had no role behind the knee-jerk changes made by India in their playing XI versus the Kiwis. Gambhir has, meanwhile, slammed Kohli the strategist behind India's poor decision-making.

"Kohli has never impressed me as a strategist. Once again, he was a disappointment on Sunday. For starters, why did he change the team from the one that played against Pakistan? If that was not enough, he also changed the batting order and had Ishan Kishan open in place of Rohit. I have played long enough with MS Dhoni to know that he would have nothing to do with these knee-jerk changes just after one game. And what I also understand is that the other support staff hardly challenge Kohli's calls," Gambhir wrote in his coloumn for TOI.

"But the question is whether Sodhi and other New Zealanders bowled well or India batted below par. I am the first one to acknowledge opposition's supremacy but after seeing Kohli and his men play the way they did on Sunday, I'd say they made Sodhi and Co. looked better than they were. From a distance it seemed there was no clear planning, role allocation and proper assessment of the conditions. Clearly, they were searching for a mountain of a score. Lack of understanding of the pitch meant they were in pursuit of a score around 170-180. As a result, Indian batsmen kept hitting in the air like millionaires and folded for 110," Gambhir added.

India are in a must-win position in their remaining three games in the Super 12 round. In addition, they need other results to favour them in order to progress to the semi-finals of the mega event in the UAE. As of now, Kohli & Co. have their back against the wall and need to produce some scintillating performances to march their way back into the tournament.