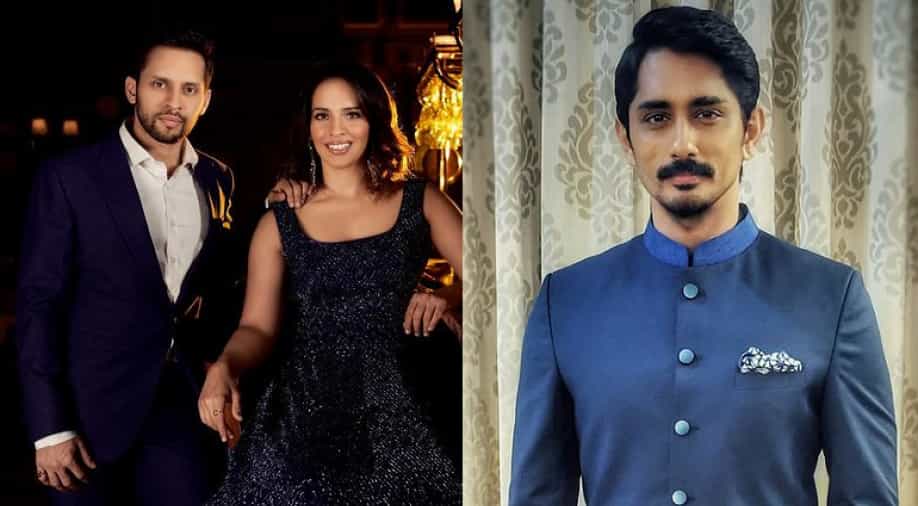 Actor Siddharth had courted controversy after his alleged 'sexist' remarks on Indian ace shuttler Saina Nehwal. Nehwal, a celebrated Indian badminton player, had recently expressed her concerns on Twitter after Prime Minister Narendra Modi's security was breached during his visit to Punjab. Reacting to her tweet, Siddharth took a dig at the shuttler with alleged 'lewd' remarks.

Indian badminton player Parupalli Kashyap has called out the actor on social media following the controversy. Kashyap, who is married to Nehwal, slammed the actor for his 'disgraceful' tweet and said Siddharth should have chosen better words for criticism.

Kashyap took to Twitter to lash out at Siddharth and wrote - "This is upsetting for us … express ur opinion but choose better words man. I guess u thought it was cool to say it this way. #notcool #disgraceful." Kashyap and Saina had tied the knot in 2018.

This is upsetting for us … express ur opinion but choose better words man . I guess u thought it was cool to say it this way . #notcool #disgraceful

The controversy erupted after Saina, in a tweet, condemned the security breach involving PM Narendra Modi's convoy in Punjab. The PM's convoy was blocked on a flyover due to a protest in Ferozepur following which the Prime Minister had to return without conducting his rally in the poll-bound state.

"No nation can claim itself to be safe if the security of its own PM gets compromised. I condemn, in the strongest words possible, the cowardly attack on PM Modi by anarchists. #BharatStandsWithModi #PMModi," Nehwal had tweeted after the security breach. Reacting to her comments, actor Siddharth triggered a massive debate with his controversial remarks.

"Subtle cock champion of the world... Thank God we have protectors of India. Shame on you," wrote actor Siddharth.

Subtle cock champion of the world... Thank God we have protectors of India.

Shame on you #Rihanna https://t.co/FpIJjl1Gxz

He later clarified his comments and said he didn't intend anything disrespectful with his controversial comments. The National Commission for Women (NCW) has also sprung into action and has urged the DGP Maharashtra to take action against the actor in the matter.

That's the reference. Reading otherwise is unfair and leading!

Nothing disrespectful was intended, said or insinuated. Period.

Nehwal herself had also reacted to Siddharth's comments and said he could have used better words to express himself. The shuttler also pointed out that controversial tweets might be helping the actor stay relevant on social media.

“Ya I’m not sure what he meant. I used to like him as an actor but this was not nice. He can express himself with better words but I guess it’s Twitter n u remain noticed with such words n comments," Nehwal said.