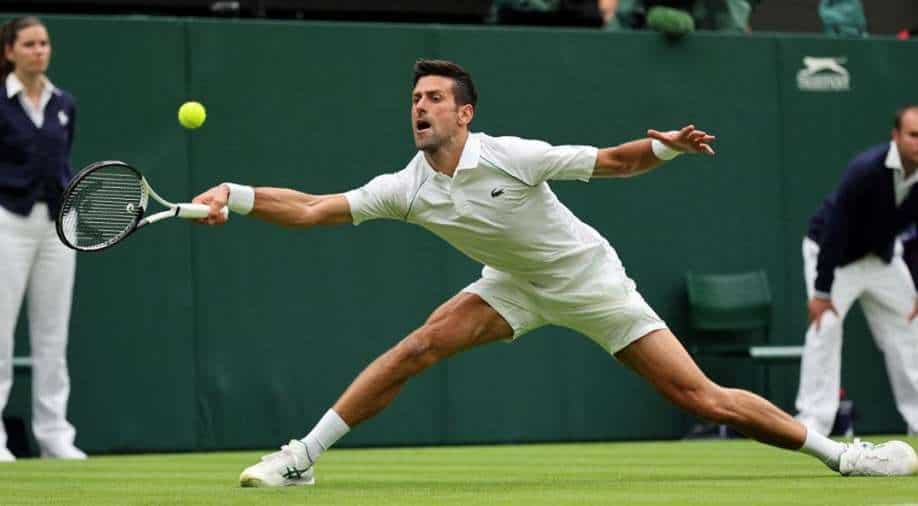 The 35-year-old needed just one break of serve in the second set and broke twice in the third to lead 5-2 before blotting his copybook slightly with a couple of loose games.

Novak Djokovic clinically disposed of fellow Serb Miomir Kecmanovic as he continued his relentless pursuit of a fourth successive Wimbledon title with a 6-0 6-3 6-4 victory on Friday.

The top seed was unplayable in the opening set of his third-round match on Centre Court, taking it in 24 minutes.

Kecmanovic, seeded 25, received the biggest cheer of the day when he finally got on the scoreboard after 35 minutes by taking a long service game.

But Djokovic was streets ahead of his 22-year-old rival as he reached the last 16 at Wimbledon for the 14th time.

The 35-year-old needed just one break of serve in the second set and broke twice in the third to lead 5-2 before blotting his copybook slightly with a couple of loose games.

It only delayed the inevitable, however, as Djokovic completed victory, his 24th in a row at the grasscourt major dating back to 2018, to set up a clash with Dutch wildcard Tim van Rijthoven.

"Obviously it helps a lot if you start off the match very well," Djokovic said of his lightning start. "The way I played first set was great.

"I maintained that level pretty much throughout the entire match. Just overall very pleased."
His next assignment against Van Rijthoven will take place on middle Sunday, which until this year was a rest day.

Wimbledon have moved with the times and have now scheduled matches on that day with the men`s and women`s fourth round singles spread over Sunday and Monday rather than just Monday.

Djokovic, who is bidding for a seventh Wimbledon title, said he was happy with the tweak.

"All the other Grand Slams are playing in middle Sunday. I`m glad that Wimbledon has introduced that. I`m in favour of that rule change," he said.

And of his opponent, Djokovic said he will do his homework, although if he plays against the Dutchman like he did against Kecmanovic, it might well be a Sunday walk in the park.

"I`m sure he`s excited to play on a big stage. He doesn`t have much to lose," Djokovic said.

"He`s on his dream run. He`s a young player that is just starting so I`m sure his career will be very good."