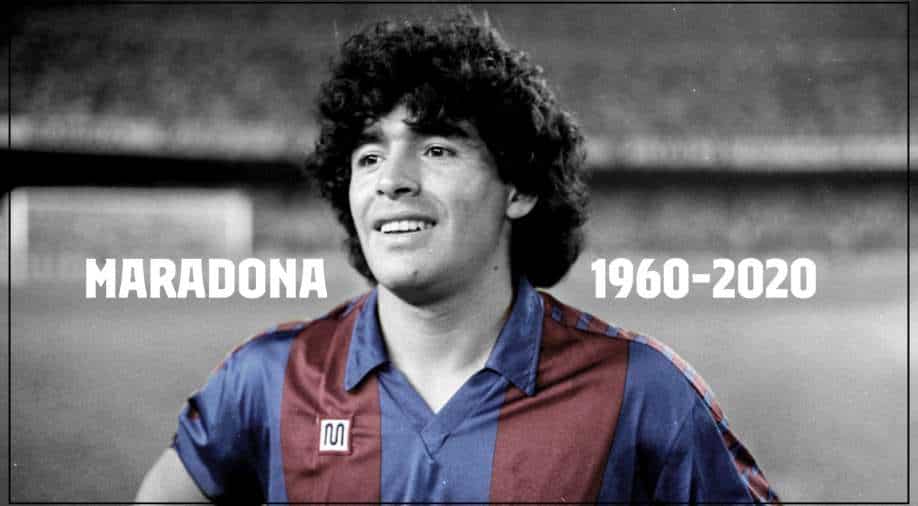 It was in LaLiga that Maradona took his first steps in European football, joining Barcelona for a then-world-record fee of $7.6million after starring in his home country for Argentinos Juniors and Boca Juniors. Joan Gaspart, who was the vice-president at Barcelona at the time, later revealed in interviews that the Barça directors who went to Argentina to work on the signing had to travel in a tank because the Argentine authorities feared for their safety.

The world of football was dealt a huge blow on Wednesday with the news of Diego Maradona’s passing at the age of 60. In Spain, there was particular sadness as so many of those currently at the heart of Spanish football knew the Argentine or were touched by him from his time in LaLiga.

It was in LaLiga that Maradona took his first steps in European football, joining Barcelona for a then-world-record fee of $7.6million after starring in his home country for Argentinos Juniors and Boca Juniors. Joan Gaspart, who was the vice-president at Barcelona at the time, later revealed in interviews that the Barça directors who went to Argentina to work on the signing had to travel in a tank because the Argentine authorities feared for their safety.

Prizing Maradona away from his loyal fans in Buenos Aires was tough, but it was worth it. Barcelona had acquired an elite player. Injury and illness meant Maradona didn’t play as many games for the Blaugrana as the club had hoped, but when he did take to the pitch of Europe’s biggest stadium it was quite a spectacle.

Even at the Bernabéu, the home of Barcelona’s eternal rivals Real Madrid, Maradona impressed. In one match, he was even applauded by the fans of the capital city side, with white handkerchiefs waved respectfully in the air after Maradona performed a graceful sidestep right next to the goal line to leave right-back Juan José flying into the post as the No.10 rolled the ball into the net.

“I remember our early training sessions with him, where the rest of the team were so amazed that they just stood and watched him,” Lobo Carrasco, one of the other Barcelona squad members at that time, recalled when looking back to that era.

After leaving Barcelona to embark on his iconic adventure with Napoli in 1984, Maradona returned to Spain in 1992. This time he signed with Sevilla FC and reunited with Carlos Bilardo, who’d been the coach as Argentina won the 1986 World Cup in Mexico with Maradona as the star of the show.

It was only one season, but that 1992/93 campaign was one that all Sevillistas from that time still remember. In his first home game at the Ramón Sánchez-Pizjuán, Maradona scored the only goal in a 1-0 victory over Real Zaragoza. Who else?

It wasn’t peak Maradona at Sevilla and he’d been out of the game for the year before his arrival, but his mere presence made an impact across the club. Fans would arrive at the stadium early just to watch his famous warm-ups, while the forward made an impact on the young players in that squad, players such as Diego Simeone or current Sevilla Sporting Director Monchi. “He helped me in a spectacular way at Sevilla,” Simeone remembered. Monchi, meanwhile, has often told a story that sums up Maradona’s generosity: “I was walking with Maradona one day and he saw that I had a Rolex, which I admitted to him was a fake one. Then, after training one day, he told me to wait behind and he gifted me a Cartier so that I’d never have to wear a fake watch again.”

Maradona intended to stay at Sevilla for some time, bringing several of his favourite cars to the city. But he departed at the end of the 1992/93 season, returning to Argentina.

It wasn’t only at Barcelona and Sevilla that Maradona left an impact in Spain, though. He also impressed fans in Barcelona and Alicante, the cities where Argentina played during the 1982 World Cup. And, in 1987, Maradona even featured for Granada in a friendly match against Swedish side Malmö, doing so alongside his brothers Hugo and Lalo, who had just signed for the Andalusian club, at the old Estadio de Los Cármenes. That game remains to this day the only game in which the three brothers lined up on the same side.

Despite spending just a few years of his legendary career in Spain, Maradona made a huge impact, netting 27 goals in 62 games and winning the Copa del Rey, the Copa de la Liga and the Spanish Super Cup. His legacy will never be forgotten in Barcelona, Seville… or anywhere.