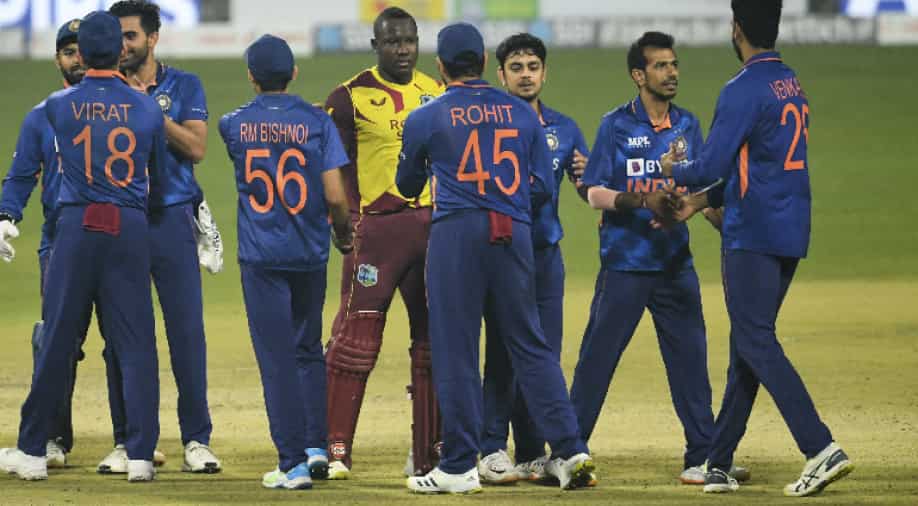 Bhuvneshwar Kumar bowled exceptionally well in the death as India survived a last-over scare to beat West Indies by 8 runs in the 2nd T20I on Friday.

Virat Kohli and Rishabh Pant`s quality knocks were backed up by a spirited bowling performance at the death by Bhuvneshwar Kumar and Harshal Patel as India defeated West Indies by eight runs in the second T20I of the three-match series against India here at Eden Gardens, Kolkata on Friday.

With this win, India has gained an unassailable 2-0 lead in the three-match series, and the final match will now be played on Sunday at the same venue.

Chasing 187, West Indies openers Brandon King and Kyle Mayers put on 34 runs for the first wicket, however, this stand was finally broken in the sixth over by Yuzvendra Chahal as he dismissed Mayers (9). Soon after, Ravi Bishnoi struck in his very first over to dismiss King (22) and the visitors were reduced to 59/2, still needing 128 runs to win from 69 balls.

Pooran and Rovman Powell kept West Indies in the chase as the duo mixed caution with aggression and after 15 overs, the Windies` score read 124/2, needing 63 runs to win from 30 balls. Pooran (62) finally departed in the penultimate over on the bowling of Bhuvneshwar Kumar, with the Windies needing 28 runs to win from nine balls.

This wicket brought an end to the 100-run stand for the third wicket. In the second-last over of the game, Bhuvneshwar Kumar conceded just four runs and as a result, the visitors were required to score 25 runs in the final over to win the game.

Harshal Patel managed to hold his nerve and in the end, India registered a win. Earlier, Virat Kohli played a 52-run knock as India posted 186/5 in the allotted twenty overs. Rishabh Pant (52*) and Venkatesh Iyer (33) also contributed with the bat as India posted a score of more than the 180-run mark.

Pant and Iyer had formed a 76-run stand for the fifth wicket. Sent into bat, India got off to a bad start as the hosts lost opening wicket Ishan Kishan (2) in the second over.  The left-handed batter was dismissed by Sheldon Cottrell.

Virat Kohli then joined skipper Rohit Sharma in the middle and after the end of powerplay overs, India`s score read 49/1. The 49-run stand for the second wicket between Rohit and Virat was cut short by Roston Chase as the spinner sent Rohit (19) back to the pavilion in the eighth over and this brought Suryakumar Yadav to the middle.

However, the right-handed batter went back to the pavilion after scoring just 8 runs and the hosts were reduced to 72/3 in the 10th over. Kohli brought up his half-century in the 14th over of the innings, however, he was clean bowled in the same over he brought up the milestone.