'It was a special feeling': Venkatesh Iyer hails Rohit Sharma and Rahul Dravid for supporting him 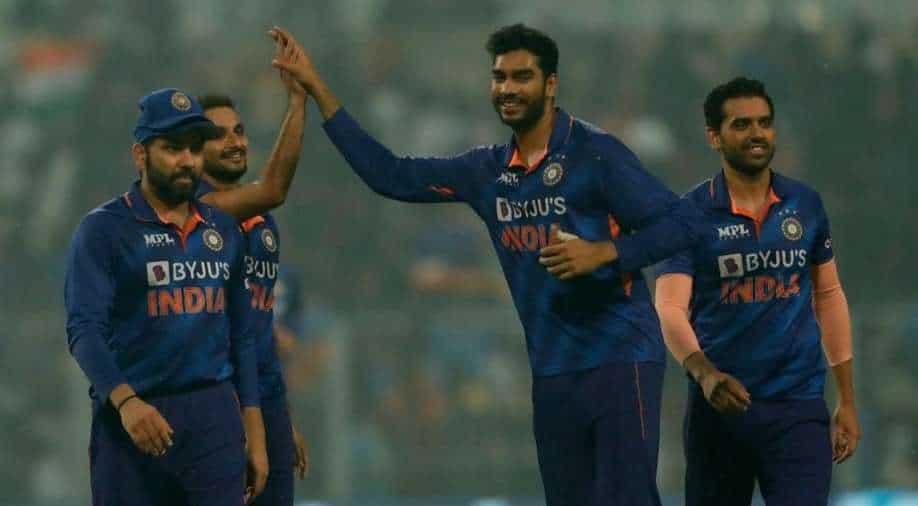 Venkatesh Iyer impressed with 1-12 in his first outing as a bowler for India. (Image credit: @BCCI). Photograph:( Twitter )

After the third T20I match against New Zealand, Rohit praised Venkatesh Iyer as he said that 'good to see Venkatesh Iyer bowling those overs with the skills he has. Important for us going forward'

Rohit's stint as India's T20I captain and Dravid's tenure as the head coach began with flying colours as the Men In Blue, who faltered at the recently concluded ICC Men's T20I World Cup 2021, produced an all-round performance despite the absence of some top regular players.

On the other hand, the T20 World Cup runners up New Zealand, failed to replicate their performance in World Cup, where they reached the finals but lost to Australia.

Meanwhile, the bilateral series against the Kiwis allowed India to press the reset button and move on from the World Cup, where they didn't even reach the semis.

In the three-match series against the Blackcaps, there were plenty of outstanding performances and one such was from Venkatesh Iyer, who impressed with 1-12 in his first outing as a bowler for India in the third and final match. Well, made the debut in the first match only, but didn't get a chance to bowl in the first two contests.

After the third match, Rohit praised V Iyer, he said, "Good to see Venkatesh Iyer bowling those overs with the skills he has. Important for us going forward. I would prefer that going forward .. teams around the world bat deep till No.8, No.9."

Now, Venkatesh Iyer talked about the support he received from Rohit and Rahul. "During the victory and trophy celebration, Rohit bhai came and gave the trophy to me and said well done. Holding the winning trophy was an emotional and proud moment for me," Venkatesh Iyer told Times Of India.