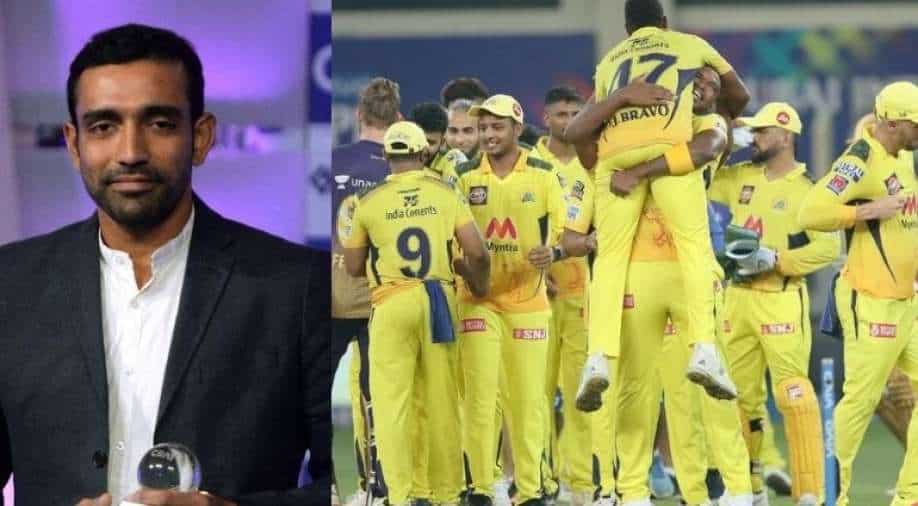 Uthappa believes that this stalwart of CSK would be the first guy CSK would go after in mega auction Photograph:( Agencies )

CSK released big names like Faf du Plessis, Shardul Thakur and Sam Curran. Suresh Raina who is the fourth-highest run-getter in IPL was also released by the four-time winners of IPL.

All of the existing IPL teams announced their retained player list on Tuesday, ahead of the upcoming season's mega auction. CSK has retained Ravindra Jadeja, MS Dhoni, Moeen Ali, and Ruturaj Gaikwad.

CSK released big names like Faf du Plessis, Shardul Thakur, Dwayne Bravo and Sam Curran. Suresh Raina who is the fourth-highest run-getter in IPL was also released by the four-time winners of IPL.

Suresh Raina has a huge 5528 runs to his name in the league and has contributed hugely to the team with his performances, especially in the initial years. Raina not being retained can be attributed to the lately disappointing form in last few seasons.

Robin Uthappa who himself was part of the Chennai Super Kings winning team last IPL has said, "He's (Raina) I think the biggest stalwart of CSK that we've had. He's been such an instrumental figure in helping CSK qualify to so many of the knockout stages in the last 10-12 years."

"So, Sureshi (Suresh Raina) has been a vital cog in the wheel, so I think he will be the first guy they will go after. Having said that, it must have been really difficult to let go of Faf but, I think the only thing that pegged it towards Mo (Moeen Ali) was the fact that he is a two-dimensional player, with both the skills and unfortunately, they had to make that choice," Uthappa stated this on the Star Sports show 'IPL Retention'.

"And they would definitely want to retain a player with two skills. But I am certain that they will go after Faf because he has been incredible for CSK over the past 5 or 6 years," he added.

Meanwhile, the two new Indian Premier League (IPL) franchises, Lucknow and Ahmedabad, have a Rs 33 crore budget to select three players from the pool before the major auction begins.