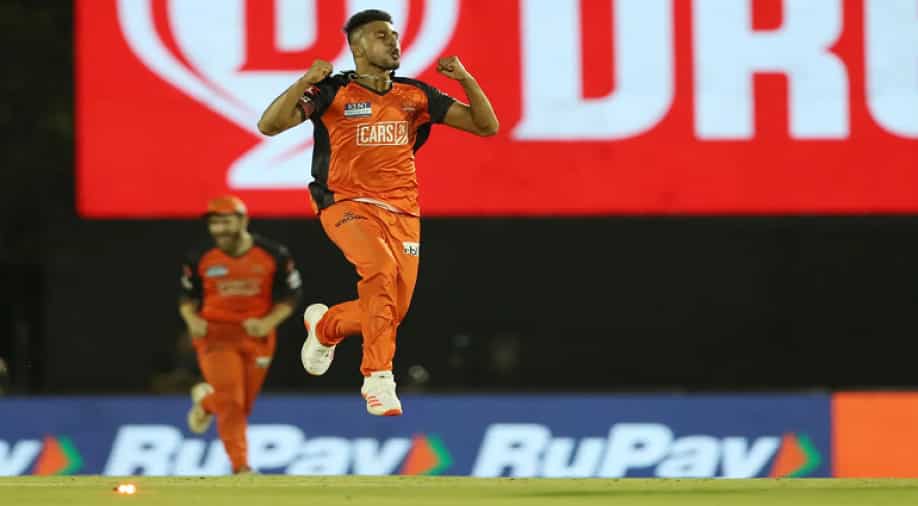 Umran Malik started with the dismissal of Jitesh Sharma and in the final over of the match, he took the wickets of Odean Smith, Rahul Chahar and Vaibhav Arora without conceding a single run.

Umran Malik was the star for Sunrisers Hyderabad with the ball as they raced to a comfortable victory over Punjab Kings in the Indian Premier League (IPL) 2022 on Sunday. The young pacer from Jammu & Kashmir was the pick of the SRH bowlers as he completed a brilliant four-wicket haul.

Malik started with the dismissal of Jitesh Sharma and in the final over of the match, he took the wickets of Odean Smith, Rahul Chahar and Vaibhav Arora without conceding a single run.

Former Indian cricket team spinner Harbhajan Singh was amazed by the pace and talent of the youngster and back him to make his place in the India squad for the 2022 T20 World Cup.

"This (Blue) is the only jersey missing and he should get it early. I feel he is the most deserving one who should be selected to play for India in that T20 World Cup in Australia. He could be your match winner there," he said on Star Sports after the end of the PBKS innings against SRH.

SRH became the first team in this year’s IPL to register four consecutive wins in the competition after losing two of their opening matches. Malik was the best bowler for them while Bhuvneshwar Kumar took three scalps at the top of the innings to bundle out a hapless Punjab Kings for just 151.

While chasing a modest total, SRH hardly faced much difficulty as Abhishek Sharma started well and the duo of Aiden Markram and Nicholas Pooran was able to guide them to victory.