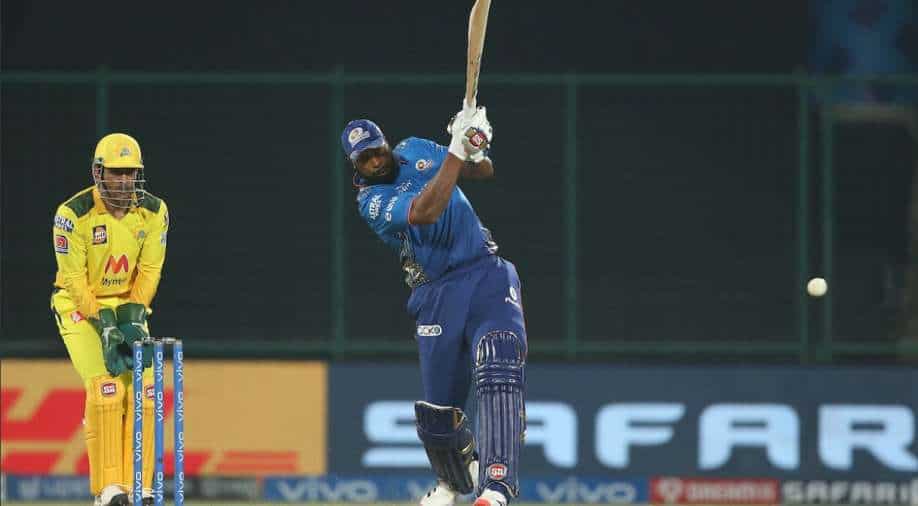 Mumbai Indians on Saturday defeated Chennai Super Kings by four wickets at the Arun Jaitley Stadium in Delhi as the five-time IPL winners chased down a mammoth 219, courtesy of a herculean effort with the bat by Kieron Pollard.

Mumbai Indians on Saturday defeated Chennai Super Kings by four wickets at the Arun Jaitley Stadium in Delhi as the five-time IPL winners chased down a mammoth 219, courtesy of a herculean effort with the bat by Kieron Pollard.

Batting first, Chennai Super Kings posted a mammoth total of 218/4 in 20 overs with Ambati Rayudu standing out among others with a blistering knock of 72 off just 27 deliveries laced with four boundaries and seven sixes.

While opener Ruturaj Gaikwad (4) was dismissed for cheap by Trent Boult in what was a superb spell with the new ball, Faf du Plessis and Moeen Ali scored 50 and 58 respectively to take CSK to 112 in just 10 overs. CSK lost du Plessis, Ali and Suresh Raina (2) in quick succession but the herculean knock by Rayudu supported by Ravindra Jadeja (22 not-out), helped CSK post a 218 – their highest total against arch-rivals MI.

Interestingly, Jasprit Bumrah conceded 56 runs against CSK in his four-over quota – the most expensive figure in IPL for the ace speedster. Kieron Pollard picked up two wickets for MI whereas Bumrah and Boult ended up with a scalp each.
Chasing 219, Mumbai Indians enjoyed a brisk start as openers Rohit Sharma and Quinton de Kock connected well early in the innings.

ALSO READ: R Ashwin's wife reveals Covid 'nightmares' her family has been through in a week

However, Shardul Thakur was quick to remove the MI skipper early in his spell. De Kock was sent packing by Moeen Ali while in-form Ravindra Jadeja got rid of Suryakumar Yadav (3).

Krunal Pandya and Kieron Pollard smashed some lusty blows before Hardik Pandya smashed a few in a brief cameo. However, Pollard continued with his blitz and took MI over the winning line with a stunning knock of 87 not-out of 34 balls.
CSK bowlers did well to change till the 15-over mark but lost the plot as soon as Pollard started dominating the show.