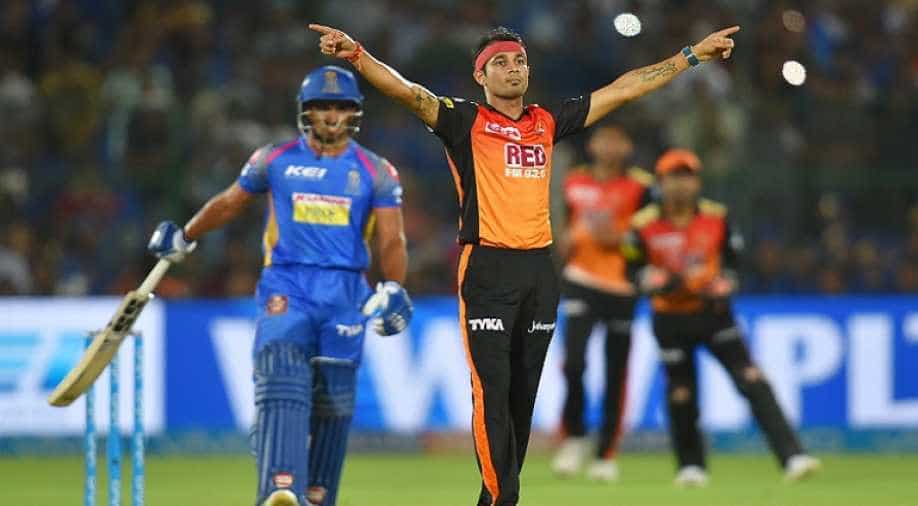 Despite giving a tough fight, Rajasthan fell 11 runs short to defeat Hyderabad at the Sawai Mansingh Stadium, Jaipur on Sunday.

Sanju Samson, who is franchise's most consistent player, again played a brilliant knock and made 40 runs off 30 balls which included three fours and one six.

On the other side, Skipper Kane Williamson and Alex Hales added 92 runs off 67 balls for the second wicket to help their team set a decent total on board.

The skipper made 43-ball 63 before giving away his wicket to Sodhi.

Alex Hales, who was playing a superb knock, lost his wicket to Gowtham after making 45 runs off just 39 balls.

Hyderabad won the toss and opted to bat against Rajasthan at the Sawai Mansingh Stadium, Jaipur on Sunday.

"We are gonna have a bat. Day game and it looks like a very good surface. Just the one change. Hales comes in for Nabi." he said

"The bowling has been going on nicely. The way we have adapted to the conditions has been superb," he added.

Meanwhile, &nbspRajasthan have lost three matches so far and won the same to be at number five in the league table.

The Ajinkya Rahane team would be looking to bring their campaign back on track by defeating Hyderabad.

Talking about their strategy for today, Rahane said, "We had a couple of days off. It is important to switch off a bit. The preparation has been fantastic and the mood in the camp has been superb. "

Both the teams are facing each other for the second time in this year's IPL.