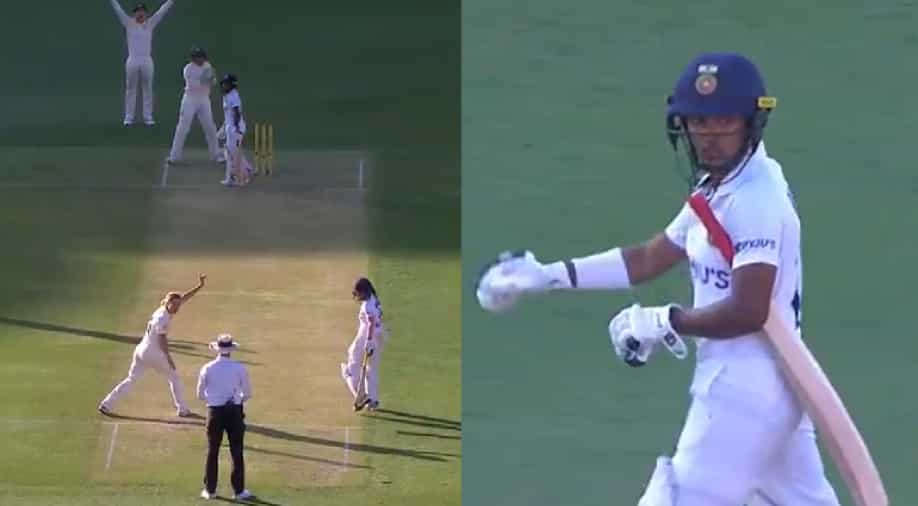 Punam Raut decided to walk back despite being adjudged not out by the umpire. Photograph:( Twitter )

Indian batswoman Punam Raut set an example of sportsmanship when she decided to walk away despite being given not-out after edging the ball in the ongoing pink-ball Test against Australia.

India's Punam Raut walked off the pitch despite being given not-out in the ongoing pink-ball Test match against Australia on Friday. The incident happened during Day 2 off the historic one-off Test match when Australia appealed for a caught behind after Raut edged one to the wicket-keeper.

However, the umpire Phillip Gillespie remained unaffected and did not raise his finger. But Raut decided to walk towards the dressing room immediately after Australia's appeal. Her act once again triggered the 'spirit of cricket' debate on social media.

The Aussie players were left surprised with Raut's decision to walk away despite the decision being in her favour. The incident took place in the 81st over of India's innings when Raut edged one from Sophie Molineux and was caught by Alyssa Healy behind the stumps. BCCI women's handle shared the video of the incident on Twitter as fans applauded Raut for her decision.

ICYMI: A caught-behind appeal was declared Not Out by the umpire, but Punam Raut opted to walk. #AUSvIND #TeamIndiapic.twitter.com/6xrofu5AVs

Raut's act brought an end to her 23-run stand with captain Mithali Raj. The right-hander scored 36 runs off 165 balls and added a crucial stand of 102 runs for the second wicket with opener Smriti Mandhana, who notched up her maiden Test century at the  Carrara Oval in Queensland.

Mandhana scripted history by becoming the first Indian woman to score a century in a pink-ball Test match and helped India post 276/5 on the board at stumps on Day 2. Deepti Sharma (12) and Taniya Bhatia (0) will resume India's innings on Day 3 of the Test match and will look to help the team cross the 300-run mark in the first session.