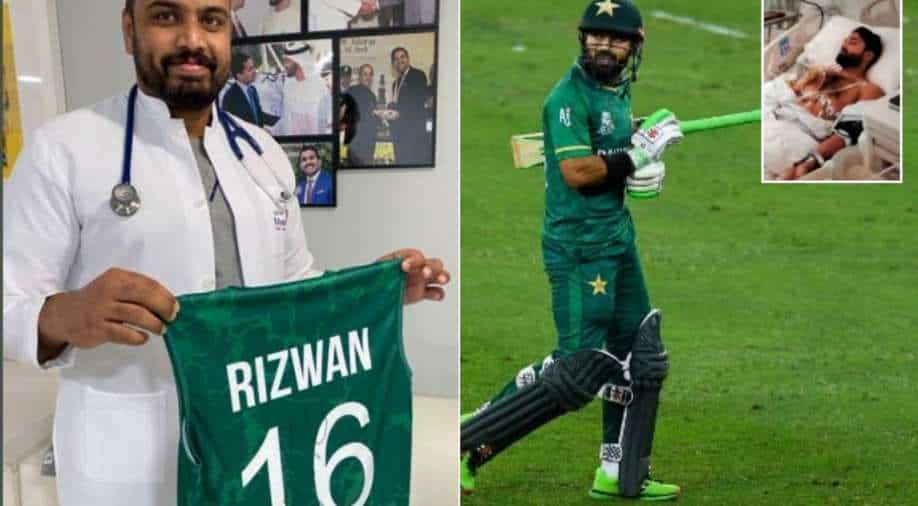 Rizwan had been suffering from intermittent fever, persistent cough and chest tightness for 3-5 days before being hospitalised

The doctor who treated Pakistan's star Mohammad Rizwan, ahead of the ICC Men's T20 World Cup 2021 semi-final clash against Australia, was astonished by the quick recovery of the player. Despite a hard-fought battle, the Babar Azam & Co. lost the crucial match by five wickets, but Rizwan has been earning praises for showing courage during the match. The 29-year-old Rizwan top-scored for his side despite spending two days in a hospital intensive care unit ahead of the Australia clash due to a chest infection.

The Indian doctor, who treated Rizwan revealed how serious the situation was, praising the wicket-keeper batter's perseverance and passion. Dr Saheer Sainalabdeen, who is a specialist pulmonologist at Medeor Hospital in Dubai, was quoted as saying by Khaleej Times, as he said, "Rizwan had a strong desire to play for his nation in the crucial knockout match. He was strong, determined, and confident. I am astonished at the pace he had recovered."

"His pain score at the time of admission was 10/10 (worst pain). So, we subjected him for a detailed evaluation to diagnose the condition," Dr Sainalabdeen said.

"Rizwan had a severe infection. Recovery and gaining fitness before the semifinal seemed unrealistic. It would have normally taken five-seven seven days for anybody to recover," Dr Sainalabdeen said.

"He seemed very focused and believed in God. His only thoughts were about the semifinal," the doctor said, adding that the player kept saying that he wants to "play and be with the team".

"Rizwan was firm, courageous and confident. His physical fitness and endurance level as a sportsman had been key in his recovery. He had been in the ICU for 35 hours," the doctor explained.

The doctor also said that during sporting events, they have seen players with injuries, however, Rizwan's case was the first time when a player with a severe infection had recovered so quickly.

The doctor said that when Rizwan hit the big sixes during the semi-final match at Dubai International Cricket Stadium in Dubai they were happy.

"The power he has regained after the illness has been amazing. His dedication, commitment, and courage are truly commendable," said Dr Sainalabdeen.

ALSO READ | T20 World Cup: Matthew Wade has his say on why David Warner didn't use DRS when he was actually not out

Rizwan had been suffering from intermittent fever, persistent cough and chest tightness for 3-5 days before being hospitalised and the results confirmed that the player had severe laryngeal infection leading to an esophageal spasm and bronchospasm.

A grateful Rizwan thanked the doctor and the medical team for their support and care. He also gifted a signed jersey to Saheer as a token of gratitude.

Meanwhile, during the match, Aaron Finch won the toss and opted to bowl first as Pakistan scored 176 for a loss of four wickets in 20 overs. In reply, Matthew Wade and Marcus Stoinis stood unbeaten as Australia chased down the target with one over and five wickets to spare, to set up the title clash with New Zealand.