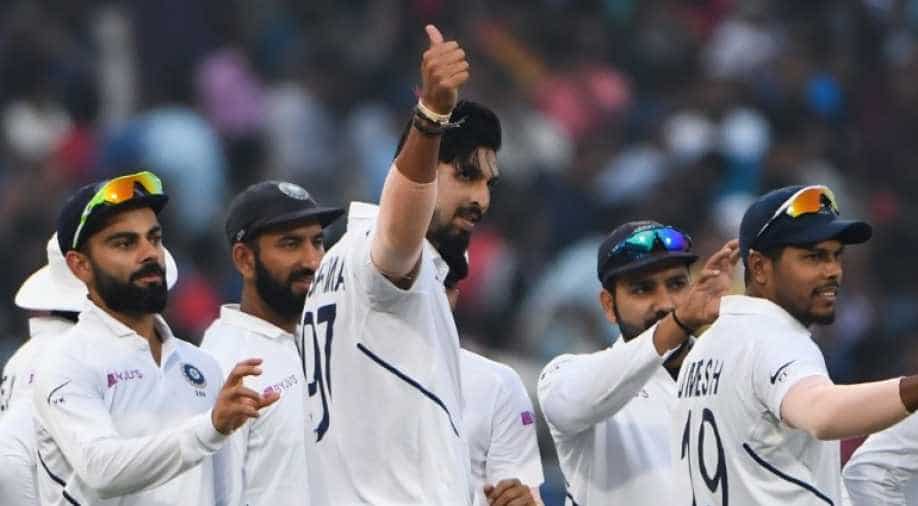 Ishant Sharma was the star of India's bowling attack on day 1 of second Test Photograph:( AFP )

India's lethal pace-trio ensured that the visitors didn't even manage a modest score after Bangladesh captain Mominul Haque won the toss and decided to bat first.

The number one ranked Indian side once again dominated proceedings against Bangladesh and ended with a lead of 68 runs before bundling out visitors for a less-than-modest score at the end of day 1 of the second Test.

Captain Virat Kohli and Ajinkya Rahane were not out on 59 and 23 respectively as India finished the day with 174 runs for the loss of three wickets.

This is the first pink-ball Test match played by either of the nations and the inauguration of this iconic match was done by Bangladesh PM Sheikh Hasina earlier in the day. BCCI President and former Indian cricketer Sourav Ganguly and batting legend Sachin Tendulkar were also present to witness the day's proceedings.

India only need a draw in this match for a 12th consecutive home series win.

When India came out to bat, last match's double centurion Mayank Agarwal and his opening partner Rohit Sharma did not trouble scorers much and India were reduced to 43-2. But skipper Kohli and Pujara's partnership of 94 runs ensured that India were on course of a clean sweep.

Pujara got out after scoring a gritting half-century.

Earlier, Ishant Sharma took a fifer and played a key role in dismissing the tail-enders. Both Umesh Yadav and Mohammed Shami were equally effective and didn't allow the frontline batsmen to settle. Yadav ended with three wickets, while Shami finished with figures of 2 for 36 runs.

Bangladesh really struggled against the display of quality fast bowling as only three batsmen were able to touch a double-digit score and three dismissed for nought. Shadman Islam was the top-scorer from the Bangladeshi side with 29 runs followed by Liton who was retired hurt on 24.

While batting, the visitors dealt with double blow when Liton Das and Nayeem Islam made an exit from the game following hits on the helmet from Shami. The visitors were forced to use two concussion substitutes, which has happened for the first time in a Test. Mehidy Hasan and Tajul Islam were the replacements of Liton and Nayeem.