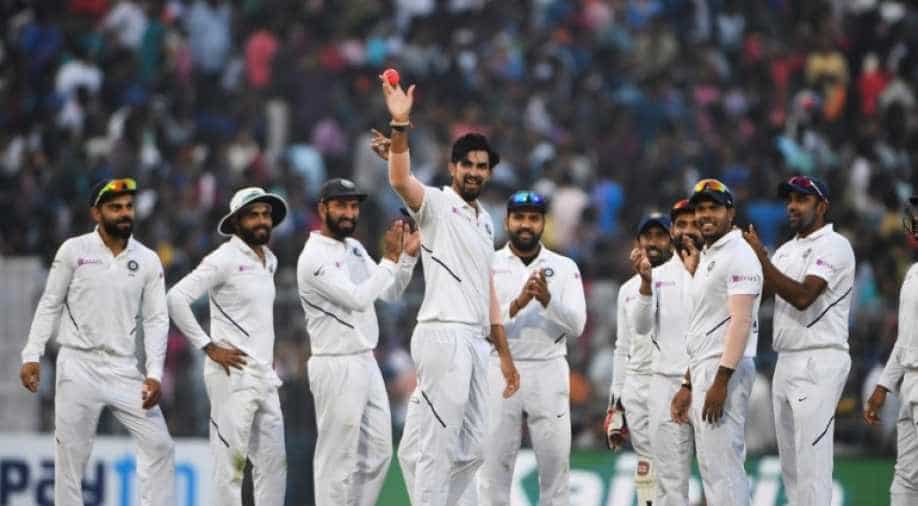 Ishant returned figures of 5-22 in India's pink-ball debut to skittle the tourists in the second session after they elected to bat first in Kolkata.

Bangladesh were forced to use two concussion substitutes Friday after India's pacemen led by Ishant Sharma bowled them out for 106 in the first day-night Test for both the teams.

Ishant returned figures of 5-22 in India's pink-ball debut to skittle the tourists in the second session after they elected to bat first in Kolkata.

But the tourists were dealt a double blow after Liton Das and Nayeem Islam were forced out of the game following hits on the helmet from paceman Mohammed Shami.

India were 35 for one at dinner -- the second session break of the day-night Test, trailing the tourists by 71 runs.

Rohit Sharma, on 13, and Cheteshwar Pujara, on seven, were batting after Mayank Agarwal was out for 14 off paceman Al-Amin Hossain.

Mehidy Hasan, who replaced Liton after the wicketkeeper-batsman retired hurt on 24, and Taijul Islam, for Nayeem, are back in the XI.

Mehidy, who made eight while batting, was replacing a batsman, so he can only bat. Taijul is a sub for an off-spinner, so he can bowl.

The International Cricket Council (ICC) approved the use of concussion substitutes for all internationals from August. This is the first time two subs are being used in a Test.

India and Bangladesh have joined the pink-ball party four years after the first day-night Test in Adelaide between Australia and New Zealand.

Ishant struck first to get Imrul Kayes trapped lbw for four, and the left-handed opener wasted a review with replays showing the ball would have hit leg stump.

Kolkata-based Shami, part of India's deadly pace trio in the series, received the loudest cheers from a packed house at Eden Gardens after getting Mushfiqur Rahim bowled for nought.

Opener Shadman Islam worked hard for his 29 off 52 balls before becoming Yadav's third victim of the first session, which ended with Bangladesh on 73-6.

Ishant returned to wipe out the tail alongside Shami who took the final wicket of Abu for nought -- the fourth zero in the innings.

India's cricket chief Sourav Ganguly has put on a grand show at Eden Gardens, which is sold out for the first four days of the match.

Bangladesh Prime Minister Sheikh Hasina was in attendance along with a host of cricketing greats including batting icon Sachin Tendulkar.