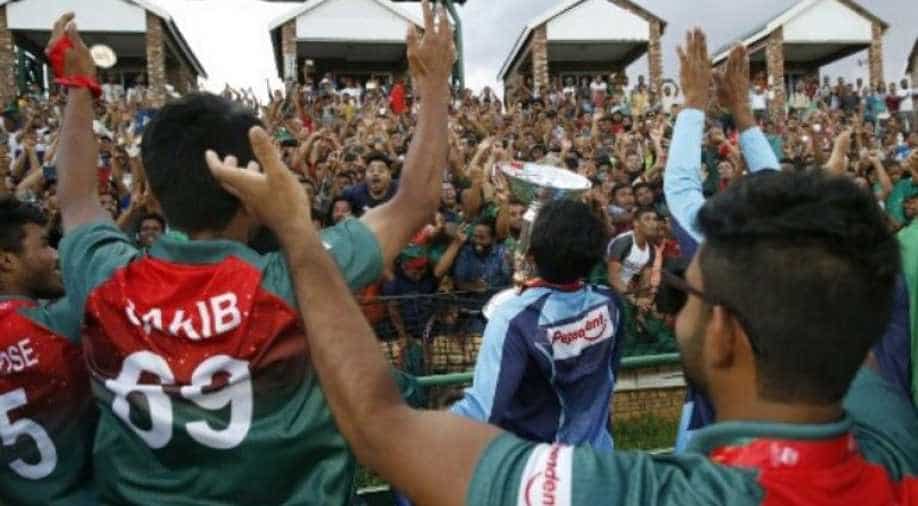 The Bangladesh cricket team celebrate with supporters after winning the ICC Under-19 World Cup cricket finals between India and Bangladesh at the Senwes Park, in Potchefstroom, on February 9, 2020. Photograph:( AFP )

After the ICC World Cup final clash between the under-19 teams of India and Bangladesh, a brawl erupted on the field during the post-match celebrations, reports said.

Bangladesh was overjoyed by the victory as this was their maiden ICC trophy across all age groups. The teammates ran towards the team after Rakibul Hassan hit the winning runs. However, things turned ugly when a Bangladesh player passed a provocative comment, which the Indian players did not take lightly, according to reports.

After the comment, players were seen pushing each other. Umpires had to interfere before things could escalate. Former South African cricketer JP Duminy managed to capture it in the video as he tweeted.

Amazing scenes here in Potchefstroom as Bangladesh pull off a miraculous victory and are the u/19 world champions.. well fought india.. standard of cricket today and throughout this tournament has been world class.. congrats Bangladesh #U19WorldCup #FutureStars pic.twitter.com/JD7re0KLo2

After the match, newswire PTI quoted Indian U-19 skipper, Priyam Garg, saying: "We were easy. We think it's part and parcel of the game - you win some and you lose some. But their reaction was dirty. I think it shouldn't have happened. But it's okay."

Bangladesh skipper Akbar Ali, who played a match-winning knock of 43 runs was quoted by PTI saying: "What happened, it should not [have] happened. I don't know what exactly happened. I didn't ask what was going on. But, you know, in the final, emotion can come out, and sometimes the boys were getting pumped, and emotions were coming through."

Akbar also apologised for the turn of events that took place after the match ended.

The Bangladesh skipper: "As a youngster, it shouldn't happen. In any position, in any manner, we have to show respect to the opponent, we should have respect for the game. Cricket is known for being a gentleman's game. So I'll say, I'll be sorry for my team."

Bangladesh's Under-19 team lifted the ICC U-19 World Cup for the first time on Sunday after beating India by 3 wickets.