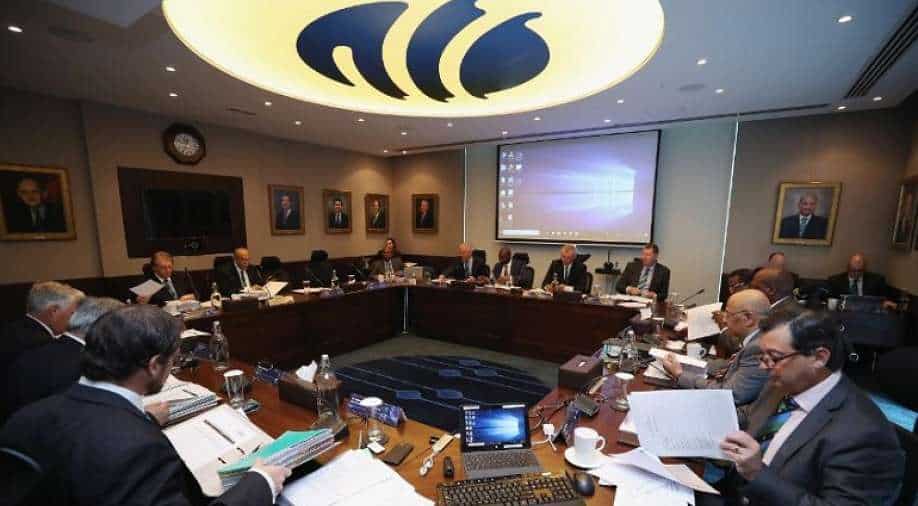 The two-day board meeting was concluded in Dubai on Sunday. (Photo- ICC) Photograph:( Others )

Gregor Barclay to complete his term as ICC Chairman till the end of October, Ramiz Raja's proposal for a four-nation tournament has been unanimously rejected by the board and BCCI secretary Jay Shah has been inducted into the ICC cricket committee.

The ICC board on Sunday convinced its chairman Gregor Barclay to complete his term till end of October before the global body starts its nomination process to find a new chairman where the Indian cricket board could play a massive role.

In another significant development, Pakistan Cricket Board chairman Ramiz Raja's proposal for a four-nation tournament has been unanimously rejected by the board, putting an end to speculations of multiple India versus Pakistan matches on neural venues.

The other notable development was BCCI secretary Jay Shah being inducted into the ICC cricket committee.

The two-day board meeting which concluded in Dubai on Sunday was a win-win one for the Indian cricket board as Barclay's continuation till October gives it ample time to strategise whether it will field a candidate for the top post in the month of November.

"There has been no discussion on renomination of Barclay. But he will finish his current two year term as a chairman till end of October. So the process of nominating a new chairman only starts in November," an ICC Board member told PTI on conditions of anonymity.

Originally, there was a possibility that the renomination or nomination would have happened in the month of June but that changed after deliberations between the member boards.

The decision also helps the BCCI buy time as they are likely to have their AGM in September after which the composition of the national parent body will be clear.

The BCCI has already appealed, seeking a a few changes in the Lodha Constitution which many feel till date is practically non-implementable.

It will be interesting to see whether president Sourav Ganguly and secretary Jay Shah go for a cooling-off in September.

Shah's name is doing the rounds as the next chairman of ICC but there has been no confirmation from either the BCCI secretary himself or sources close to him about his apparent interest in throwing his hat in the ring.

Ramiz's proposal shot down by board

PCB chairman Ramiz Raja's ambitious proposal of conducting a four-nation tourney comprising India, Australia, England under the aegis of the ICC was unanimously rejected by the all-powerful board even though there was a projected revenue of USD 750 million for five years.

"In any case, ICC's Financial and Commercial Affairs Committee (F&CA) was against this proposal. As we know that the MPA (Members Participation Agreement) doesn't allow any member nation to host more than tri-nation, organizing four-nation every year would have in any case devalued ICC's own marquee events," a board member said.

Another sensitive issue which board members are talking in hushed tones is whether Raja will remain PCB chairman for long after Imran Khan was removed from Prime Minister's position.

PCB chairman is a political appointee as Pakistan PMs are always Patron-in-chief of the board. Hence Raja, an appointee of Imran Khan, might be forced to tender his resignation in current political climate.

The BCCI was always clear in its stand that it won't play four-nations with its calender choc-a-bloc and a lot of bilateral commitments that need to be honoured. On top of that is player's workload and mental health.

There were reports that ECB's Tom Harrison was also independently interested in exploring ideas of a four-nation tourney but it's now evident that nothing of that sort happened at board meeting.

BCCI secretary Jay Shah is one of the new inductees in the ICC cricket committee with former Sri Lankan captain Mahela Jayawardene being reappointed as former player.

The ICC Cricket Committee acknowledged that the performance of home umpires was strong and had not affected games. The use of home umpires had also led to 12 members of the International Panel umpires making their Test match debut.

In line with a previous recommendation from the men's Cricket Committee, the CEC agreed that more neutral match officials should be utilised as travel restrictions are lifted while building on the success of the use of home umpires.

From the next season, one neutral on-field umpire will make a comeback in Test matches along with home team's elite panel umpire for company. For white ball games, ICC's Elite and Emirates panel home umpires will continue doing the job.

Afghanistan will be represented in ICC by Mirwais Ashraf

The ICC Board received an update from the Afghanistan Working Group which recommended Mirwais Ashraf as the ACB's appointed representative to the Board.

The ACB confirmed their continued commitment to developing women's cricket and will submit a full action plan and budget to do so to the Working Group which will continue to monitor the situation and receive regular updates on its progress.

South Africa will host the inaugural U-19 Women's T20 World Cup in South Africa to be staged in January with 16 countries taking part.

The qualification pathway for the ICC Men's T20 World Cup 2024 was confirmed with 12 teams qualifying automatically for the event.

The top eight teams from the 2022 event will be joined by the two host Members, West Indies and USA plus the next highest-ranked teams on the MRF ICC Men's T20 rankings table as of November 14, 2022.