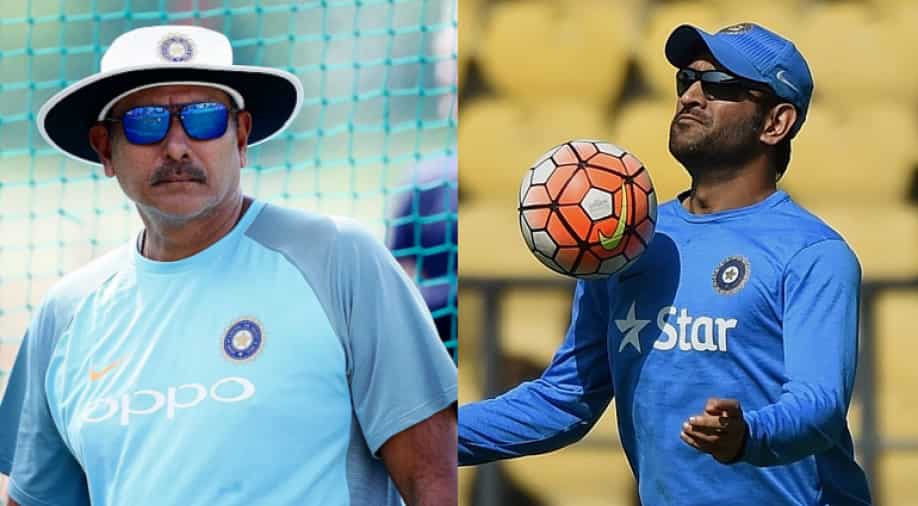 Ravi Shastri recalled how he once scolded MS Dhoni for playing football ahead of an important game. Photograph:( AFP )

Former India head coach Ravi Shastri recalled how he once had yelled like never before at MS Dhoni for playing football ahead of the Asia Cup final.

MS Dhoni's love for football is a secret to none. Dhoni wanted to be a goalkeeper in football before trying his hands at wicket-keeping in cricket. He went on to become one of the most successful wicket-keeper batters in the world and enjoyed tremendous success in his illustrious international career for the Indian cricket team.

Dhoni, who captained India to numerous memorable triumphs, retired from international cricket in 2020 but continues to ply his trade for Chennai Super Kings in the Indian Premier League (IPL). Dhoni has also given up captaincy at CSK and continues to play only as a wicket-keeper batter.

On Saturday, Dhoni was seen enjoying some football ahead of CSK's clash against Sunrisers Hyderabad in the ongoing IPL 2022. Former India head coach Ravi Shastri, who has been on commentary duties during the ongoing season, revealed an interesting anecdote regarding Dhoni's love for football.

Shastri, who served as India's full-time head coach from 2017 to 2021, revealed how he once yelled at Dhoni like never before to stop his game of football before Team India's final against Pakistan in the Asia Cup. Shastri said there was dew before the game and he didn't want Dhoni to pick up an injury ahead of the all-important game.

“He loves football. It scares, the intensity he plays, you from the outside, you hope he doesn’t get injured. I remember before the Asia Cup final, there was dew, he went skidding five minutes before the toss," said Shastri on Star Sports.

“I’ve never yelled like that in my life, I said stop the game! Something like that. You don’t want to lose your main player in a game against Pakistan, because five minutes later was the toss. But, to get him out, leave the football, impossible," he added.

After struggling with the bat in the last couple of seasons in the IPL, Dhoni got off to a great start in the ongoing IPL 2022 with a half-century in CSK's opening clash against Kolkata Knight Riders. However, he has since struggled to fire and has managed only 42 runs in his last three games.

CSK are yet to get off the mark in IPL 2022 as they have lost their first four matches in a row this season under their new captain Ravindra Jadeja.