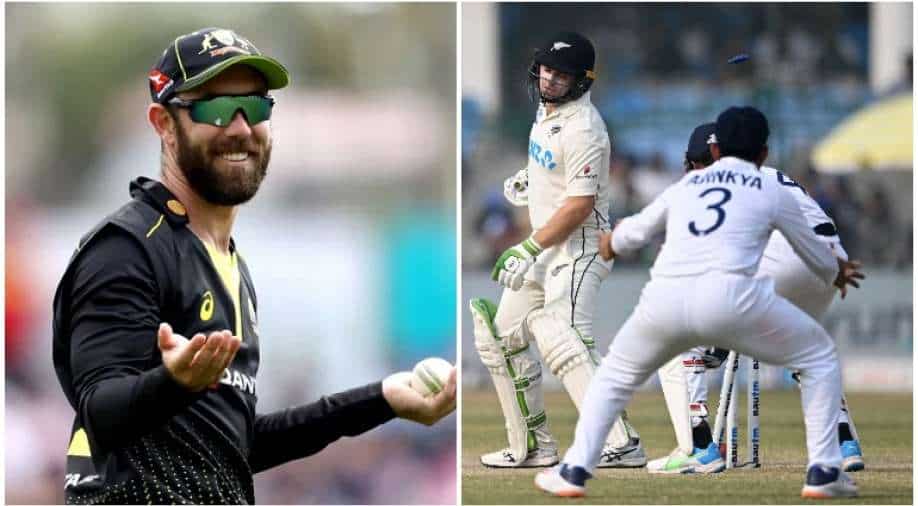 Glenn Maxwell's tweet went viral during Day 5 of the first Test between India and New Zealand in Kanpur on Monday (November 29). Here's what he wrote:

India and New Zealand produced a thrilling end to the first Test at Green Park, Kanpur on Monday (November 29). At the start of the day's play, all three results were on the cards as hosts Ajinkya Rahane-led India needed 9 wickets whereas the Black Caps required 280 more for a win (being 4 for 1).

While New Zealand started the day's play on a bang, going into the lunch session without losing a wicket at 79/1, before Umesh Yadav's strike in the second session led to the Kiwis' collapse. From 79 for 1, the NZ batting line-up slipped to 155 for 9 before the last-wicket stand, between debutant Rachin Ravindra and Ajaz Patel, bailed the Kiwis out of a crisis as they survived 52 balls to ensure a riveting draw.

Thus, world cricket had a close eye on the series opener between India and New Zealand, due to the topsy-turvy contest witnessed at Kanpur. As the pitch had everything for pacers, spinners and batters, the contest went down the wire with plenty of drama and action in the last half hour. Hence, many tweeted regarding the proceedings in Kanpur.

Glenn Maxwell, Australia's limited-overs all-rounder, also tweeted on the IND-NZ Test match. He wrote, "Anyone else watching INDvNZ. How good's Test cricket?" His tweet went viral in no time as the all-rounder also got a reply from Aussie great Shane Warne (who agreed with him and stated how keenly he is awaiting the start of Ashes 2021).

Anyone else watching #INDvsNZ?
How good’s test cricket?

Talking about the Kanpur Test, Rahane-led India won the toss and opted to bat first. Riding on half-centuries from Shubman Gill, Ravindra Jadeja and Shreyas Iyer's 105, India posted 345 in the first essay. In reply, NZ managed 296 all-out before India declared their second innings at 234-7, setting up a stiff 284-run target. The Kiwis ended the game at 165/9 as bad light led to a ten-minute early stumps on the final day

After the game, Rahane told the broadcasters, "Very good game of cricket, they played really well. We came back really well after the first session. We wanted to get that partnership going. We were looking to bowl 5-6 overs in the end, but we needed that partnership to carry on. I don't think we could have done anything different. The chat with the umps was about the light. As a fielding team, you want to bowl more overs, as a batting unit you don't want to bat in that situation. The chat was about the light, but umpires made the call and I thought they were right. I thought on this wicket the spinners had to bowl long spells. It was all about rotating the bowlers and they bowled really well. I am really happy for Shreyas. He had to wait a long time for his Test debut. He batted really well. The way he works, his record in FC cricket is really good. Virat is coming back for the next game. We'll have to wait and see till the Mumbai game. I am not going to make any comments but the management will make a call."