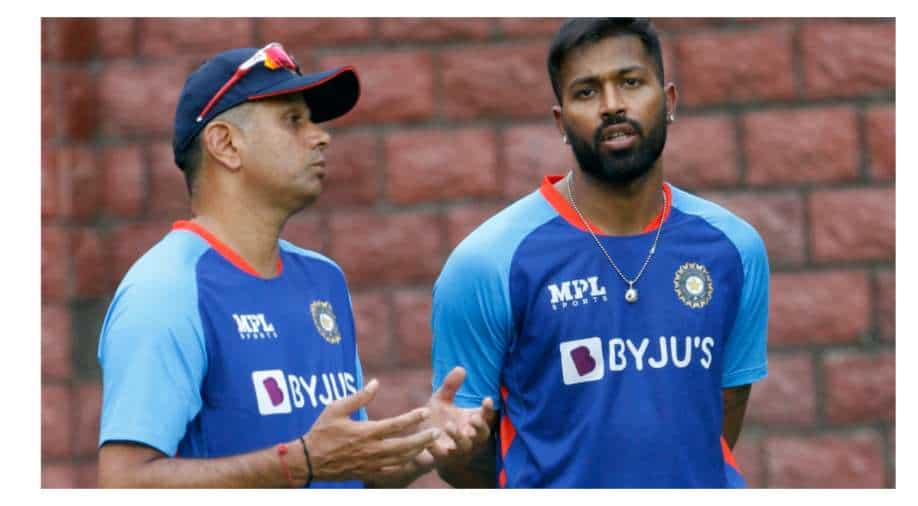 Rahul Dravid all praise for Hardik Pandya ahead of SA T20Is Photograph:( AFP )

Ahead of the India-South Africa T20Is, at home, head coach Rahul Dravid was all praise for all-rounder Hardik Pandya. Dravid hailed the 28-year-old's leadership skills and is eager to get the best of him in all departments.

Hardik Pandya made heads turn in the recently-concluded IPL 2022. Under him, debutants Gujarat Titans won their maiden championship whereas Hardik impressed with 487 runs and eight wickets overall. His leadership was exemplary as he brought the best out of his teammates and led with aplomb.

Ahead of the India-South Africa T20Is, at home, head coach Rahul Dravid was all praise for all-rounder Hardik. Dravid hailed the 28-year-old's leadership skills and is eager to get the best of him in all departments.

"I just met Hardik a couple of hours ago. For the guys who played the final, we gave them an extra day off. But I think his leadership was very impressive right through the IPL. He performed very well. In the sense, you don't have to be designated as a leader to be part of any leadership group. It's not only about Hardik being designated in a position. At this point in time, it's really about it's good from our perspective that he has started bowling again. We know what that does for us, and what his bowling can add to our depth," Dravid told reporters in New Delhi ahead of the India-SA series opener, on Thursday (June 09).

Hardik will be making his return in India jersey during the SA T20Is. He was last seen representing India in the 2021 T20 World Cup and since then, he was out of action in order to fully recover from his back issues. Following a glittering IPL campaign, he will be desperate to carry on with his form for Team India as well.