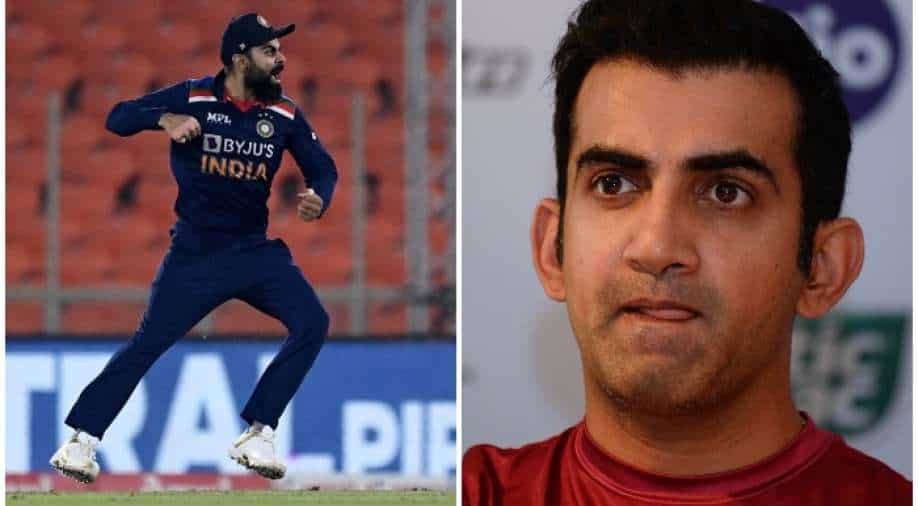 Former Indian batsman Gautam Gambhir has lauded skipper Virat Kohli for handling Bhuvneshwar Kumar to perfection while also heaping praise for giving the ball to the veteran seamer in the 13th over of the match – one which changed the course of the run-chase by England.

One of the biggest positives for the Indian cricket team from the recently concluded five-match T20I series against England has been the comeback of Bhuvneshwar Kumar. The veteran seamer, returning back to the team after a lengthy spell on the sidelines due to injury, not only bowled some fantastic spells but also helped India win the final match to clinch the series 3-2.

Former Indian batsman Gautam Gambhir has lauded skipper Virat Kohli for handling Bhuvneshwar Kumar to perfection while also heaping praise for giving the ball to the veteran seamer in the 13th over of the match – one which changed the course of the run-chase by England.

India ended up scoring a massive 224/8 in 20 overs in the fifth T20I at the Narendra Modi Stadium in Ahmedabad. While Bhuvneshwar started the rout, with the ball, by dismissing Jason Roy in the first over, the 130-run partnership between Jos Buttler and Dawid Malan kept everyone at the edge of their seats.

Kohli handed over the ball to Bhuvneswar in the 13th over and the veteran seamer started to set up Buttler with some slower ones before the England batsman skied it in the fifth ball of the match. England's run-chase derailed after Buttler's dismissal as the visitors conceded the match by 36 runs.

"It was an unbelievable over. And good captaincy from Virat Kohli as well to bring him on in the 13th over. Because the run chase was absolutely on. He can just mix up his deliveries," Gambhir told ESPNCricinfo.

ALSO READ: Zaheer Khan feels this player 'made it possible for Virat Kohli to open innings'

"I remember one reverse sweep which Jos Buttler missed, it was just a quicker one, and a yorker, and one wide outside the off-stump. He used all the variations he had to the best of his abilities, and it was the turning point of the game," Gambhir added.

The former India batsman further explained why Bhuvneshwar is so successful with the new ball.

"I think it's difficult to play swing bowlers as compared to seam bowlers in T20 cricket. Because with seam bowlers you can actually see the line and hit through the line. But if its swinging both ways, you would have to wait a little longer. And that is why Bhuvneshwar Kumar is so dangerous with the new ball. He can swing the ball both ways," he said.

"Bhuvneshwar Kumar is very, very important to the team. There will always be times when we will discuss Jasprit Bumrah, and Rohit Sharma, and Virat Kohli, because of their flamboyance and stuff. But there are people like Bhuvneshwar Kumar, who are very useful and always go under the radar. But these are just as important as these guys.

ALSO READ: 'It made no sense not having India and Pakistan series': Ramiz Raja on WTC

"Look at what he did today (in 5th T20I). It was unbelievable on a wicket where more than 400 runs were scored. When he started, everyone said he is just a new-ball bowler. But he has developed as a great death bowler as well. Imagine Jasprit Bumrah and Bhuvneshwar bowling together in the death overs," Gambhir pointed out.

"I always believe these guys who go under the radar should always be given appreciation for their contribution. Bhuvneshwar Kumar is one of the great assets to Indian cricket. He can't bowl at 145kph, but he has other abilities and he uses it to the best of his abilities," he signed off.

After winning the Test and T20I series, India would be looking to sweep the tour by winning the three-match ODI series starting from March 23 at the Maharashtra Cricket Association Stadium, Pune.