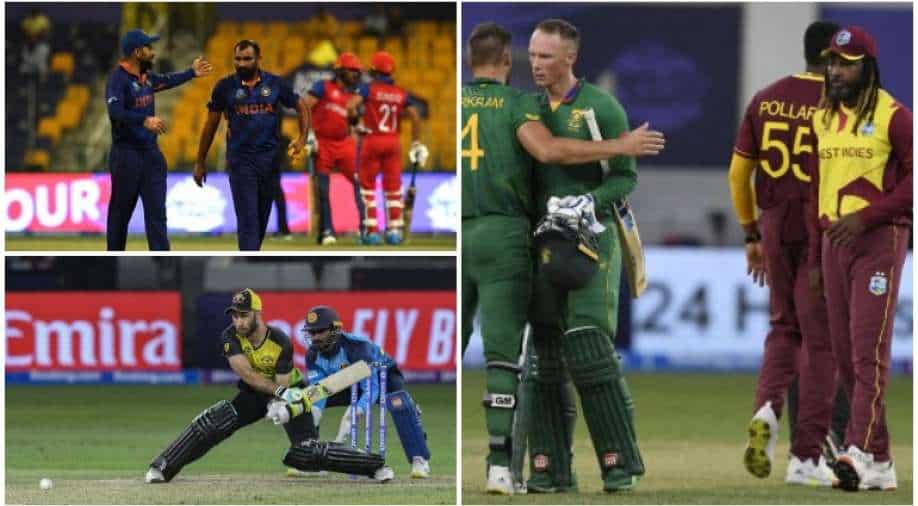 Some big names such as Chris Gayle, Andre Russell, Mohammed Shami, etc. didn't have a memorable campaign in the T20 World Cup. Here's a look at some under-performers from the showpiece event:

After IPL 2021, the cricketing lovers have had plenty of action from the 22-yard cricket strip with the T20 World Cup 2021 edition, being held in the UAE. While the tournament's knockout round has commenced, there has been plenty to cherish for fans as both batters and bowlers have kept them entertained all throughout.

While some underrated names have made a mark and stood tall for their respective sides, some big-ticket names couldn't live upto the heavy expectations and had a horrendous campaign. Let's have a look at how some daunting names in the shortest format couldn't do wonders in the Super 12 round:

The Universe Boss is considered to be the Don Bradman of the shortest format. Playing his last possible T20 WC, the left-hander didn't have a fruitful run in the seventh edition for the two-time winners West Indies. One of the main reasons for Kieron Pollard & Co.'s early exit was due to Gayle's low returns with the bat. He ended the tournament with scores of 13, 12, 4, 1 and 15.

Russell's big-hitting pushes any opposition to the back foot. However, Dre Russ never arrived in the showpiece event with both bat and ball. He had a forgettable run with scores of 0, 5, 0, 2 and 18*. He, however, fared much better with the ball. The all-rounder claimed three wickets and held his nerves while bowling the final over versus Bangladesh in a thrilling encounter. He also returned with two wickets versus Sri Lanka.

Shami was mercilessly trolled after India's ten-wicket defeat versus Pakistan in their Super 12 opener. While the right-arm pacer did have two very good games, versus Afghanistan and Scotland respectively, the senior pro leaked runs in the other three games. He had figures of 3.5-0-43-0 versus the Men in Green, conceded 11 runs in his single over against New Zealand and was also taken to the cleaners versus Namibia, where he ended with 4-0-39-0. Surely, more was expected from the highly-talented pacer.

Dawid Malan, the No. 2 ranked batsman in ICC T20I rankings, hasn't had the best of runs in the tough and tricky conditions in the UAE. In five games for England in the Super 12, the left-hander returned with scores of 28* (25), 8, 6 and 33. He has been a bit slow to start off his innings and hasn't been at his fluent best. Eoin Morgan & Co. have continued to back him and will be desperate to see him among runs in the concluding stages of the tournament.

The Aussie all-rounder is one of the best T20I players worldwide. After a terrific IPL 2021, Maxwell was expected to go all-out in the T20 WC Super 12 round. However, he hasn't lived upto expectations so far. He has had scores of 18, 5, 6, 0* and 0*. The 33-year-old had enough time to create an impact when he came out to bat versus South Africa, Sri Lanka and England. Nonetheless, he couldn't do much and will like to turn it around in the second semi-final, versus Pakistan.

Bangladesh have quite a few big names in their line-up, such as Mustafizur Rahman, Mushfiqur Rahim, Mahmudullah, Shakib Al Hasan, etc. Thus, they were expected to do much better than returning winless in the main draw of the tournament. One of the reasons for their disastrous campaign was Mustafizur's poor returns. He returned with only two wickets in the Super 12 but remained economical (except the Australia game). However, more was expected of him for being one of the chief wicket-takers for the Bangla Tigers. The left-arm pacer finished with 8 wickets in 7 games, with four coming in a single encounter.

Rahim has been one of the most dependable batters in the Bangladesh line-up. The right-hander has been a force to reckon with across formats and often bails his side out of crisis. While the experienced campaigner did start well in the Super 12, with a 57* versus Sri Lanka, he fizzled out as the tournament progressed. He ended with a solitary fifty-plus score and five single-digit scores overall (including the qualifiers).