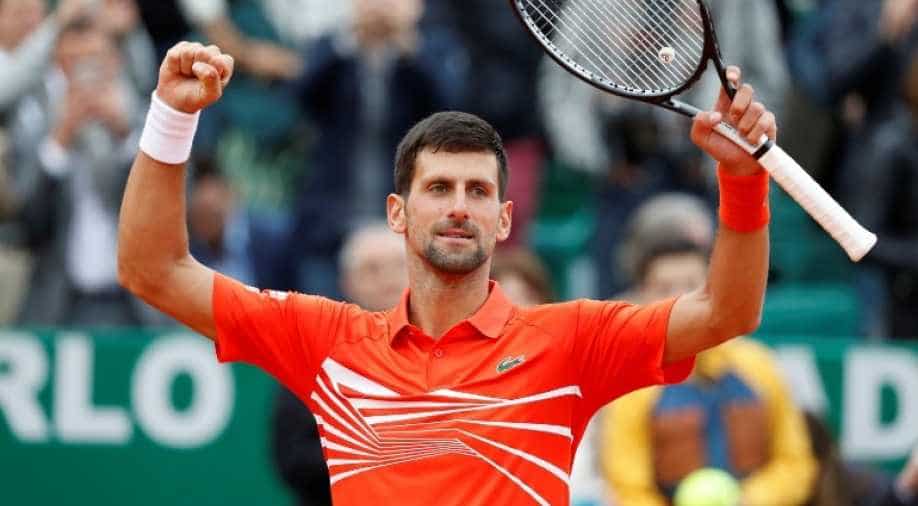 Top seed Novak Djokovic might be out of pocket after trashing the floor of a Roland Garros gym but there was little else troubling the Serb after he opened his French Open bid on Monday by dismantling Poland`s Hubert Hurkacz.

The 32-year-old, bidding for a second Roland Garros title and to become the first man in the professional era to hold all four Grand Slam titles on two separate occasions, mixed power and precision in equal measure to win 6-4, 6-2, 6-2.

Reigning champion Rafael Nadal, the man most likely to block Djokovic's path to a second "Nole Slam", had earlier launched his bid for a 12th title on the Parisian clay in sublime style.

But Djokovic more than matched the Spaniard's display with a near faultless performance in the afternoon sunshine on Court Philippe Chatrier to seal a 22nd consecutive win in Grand Slam play since losing in the quarter-finals here last year.

On Friday Djokovic posted a video after the medicine ball he was working out on went through a wooden floor.

"I probably will," Djokovic told reporters when asked if he had received a repair bill.

"The damage was pretty big, I must say. You know, huge muscles that I possess, it's kind of expected I make the big hole like that,'' Novak said.

"I just swing with the ball quite hard in front of me, kind of to warm up the upper body, and after a second throw, I heard a crack. The wooden floor completely collapsed under. They fixed it in less than a day. Next day it wasn't there. But the next day I was doing it on a concrete wall and concrete steps. I learned my lesson," Djokovic added.

Djokovic is bidding for his second title at Roland Garros having beaten Andy Murray in 2016 to hold all four Slams together and match Rod Laver's 1969 feat.

Since his first, the French Open has undergone a huge makeover and Djokovic said he is impressed with the revamp of Chatrier, hinting that it could give him a subtle advantage.

"Very nice. Great job, Roland Garros, for sure, to make this kind of renovation in less than 12 months is really impressive. It's a pleasure to play in the new court. It's different. It's a different feeling,'' he told reporters.

"It looks different, obviously, and feels a bit different. Feels a little bit more like indoor, which I like," Djokovic added.

Djokovic broke serve in the opening game on his way to taking the opening set in routine fashion and the only blip was when he dropped serve at 4-1 in the second set.

The match was more or less in the bag by then, however, and Djokovic cantered to victory to set up a second-round clash with Swiss lucky loser Laaksonen.

Djokovic has prior experience in needing a French Open title to win four Grand Slams in a row, although this time perhaps there is less pressure as he already triumphed on the clay.

''The routine will be the same though. I just need to be in my lockdown, so to say, mentally, and just do things that have worked for me in the past," he said.