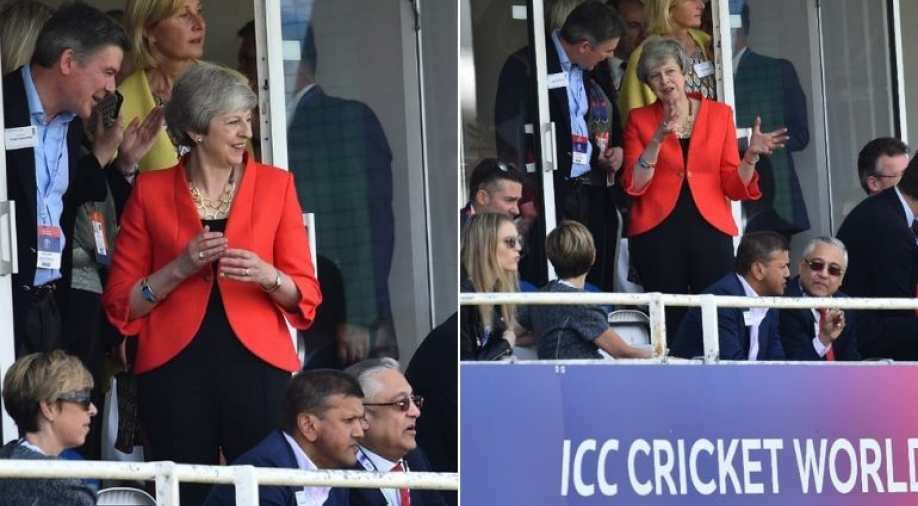 During the match, Theresa May was captured applauding from the stands for England team

The Cricket World Cup 2019 is underway, with the first match of the tournament going on at the Oval stadium between the hosts England and South Africa today.

Under the bright London skies, Britain's Prime Minister Theresa May, who announced last week to quit as country's prime minister in the wake of the failure to get her Brexit deal passed.

Last week, May announced that on June 7 she would step down after three times failing to get her Brexit deal approved by parliament.

The European Union (EU), with whom Britain decided to sever ties in a referendum, has refused to accept May's deal and she now hopes a new prime minister will "take the process forward".

Now, free from the burden of trying to deliver Britain's exit from the EU, May decided to watch the inaugural match of the tournament.

During the match, She was captured applauding from the stands for Eoin Morgan-led England team.

May, who once likened her resolve to see her Brexit plan through to the determination of her cricket hero Geoffrey Boycott to get runs, has long been a lover of the sport.

Free from Brexit burden, PM Theresa May heads to the cricket https://t.co/P4UVnAlqLl ⟶ via https://t.co/0I4IIflkwI pic.twitter.com/m8dgcbDYuA

"A 10.30am start at The Oval - if there's anything in the wicket, it'll be in the first hour," he said. "We've got some fantastic fast bowlers and we're hoping it'll be a great occasion today."

England skipper Eoin Morgan said, "We would have looked to do the same, just preferring chasing. The wicket looks really good."