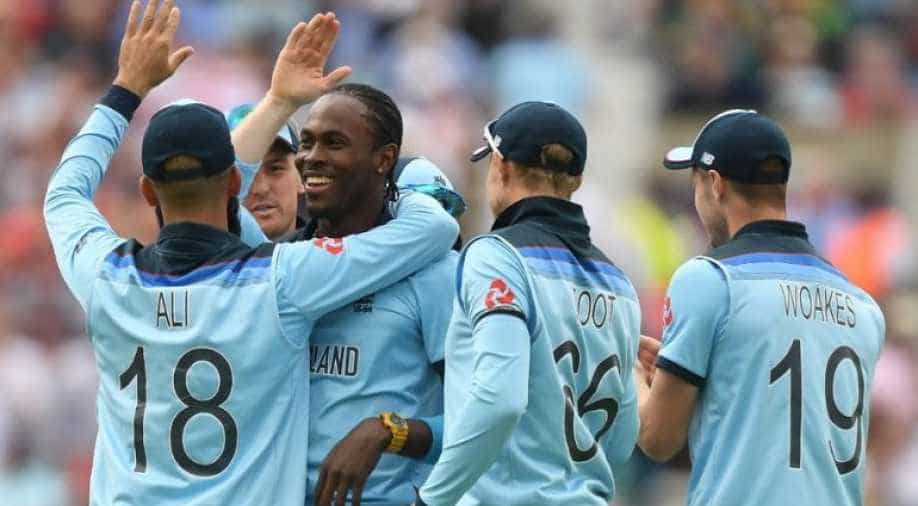 Eoin Morgan-led England defeated South Africa by 104 runs in the inaugural match of the Cricket World Cup 2019 on Thursday at the Oval stadium.

Rassie van der Dussen also played a decent knock but could not inspire the team towards victory.

South Africa also suffered a huge scare as Hasim Amla retired hurt after being hit by a Jofra Archer bouncer but later came to bat again and eventually lost his wicket to Plunkett after scoring 13 runs.

Earlier, Ben Stokes top-scored with 89 as England posted a solid but not commanding total of 311 for eight.

After being put in to bat, the tournament favourites lost Jonny Bairstow to the second ball of the innings, caught by wicketkeeper Quinton de Kock off spinner Imran Tahir, but Roy and Root shared a 106-run partnership to steady the hosts.

Roy never threatened to dismantle the bowling as he has done regularly in recent matches, accumulating 54 runs before he skied Andile Phehlukwayo to Faf du Plessis at mid-off.

Three balls later Root departed for 51, playing a loose drive at Kagiso Rabada to give JP Duminy a simple catch at backward point and leave England on 111 for three.

South Africa continued to bowl tightly as Morgan and Stokes set about rebuilding the innings.

Morgan struck the first six in the 26th over and the captain cleared the ropes twice more in a fourth-wicket partnership of 106.

Morgan, on 57, was brilliantly caught off Tahir by Aiden Markram at long-on, the fielder diving forward to catch the ball inches from the turf, and England failed to cut free.

Jos Buttler made a scratchy 18, Moeen Ali three before he too fell to a superb catch on the boundary by Du Plessis and Chris Woakes 13 as the last 10 overs produced 76 runs to leave the match finely poised at the half-way stage.

Adil Rashid to Andile Phehlukwayo, catch out by Stokes.

Next batsman is Rabada.

Archer to der Dussen, catch out by Moeen Ali.

Hashim Amla back on the crease...

Amla retired hurt after being hit by a Jofra Archer bouncer.

Amla had made five when he missed an intended pull off the fast bowler, the ball crashing into the grille of his helmet after he was beaten for sheer speed. He had several minutes of on-field treatment before walking off.

Instead of building partnerships, South Africa are losing wickets.

Next batsman is Andile Phehlukwayo.

Moeen Ali to Duminy, catch out by Ben Stokes.

Next batsman is Dwaine Pretorius.

Things are not looking good for South Africa at the moment, they need partnerships.

Liam Plunkett to de Kock, catch out by Joe Root.

Next batsman is JP Duminy.

Jofra Archer is on 🔥

Archer is literally on fire.

Archer to Faffy, catch out by Moeen Ali.

It's the English trump card showing his game...

Archer to Markram, catch out by Joe Root.

Next batsman is Faf du Plessis.

The physio comes at the crease and checks everything but Amla is not looking good.

Finally, he is walking back to the pavilion.

Next batsman is Aiden Markram.

New injury scare is not good news for the South African team just at the start of the tournament as they are already dealing with several.

Quinton de Kock and Hashim Amla are at the crease and Chris Woakes will launch the bowling attack.

England put up 311 runs against South Africa in inaugural match.

South Africa restricted England to 311 for eight in the World Cup opener at the Oval on Thursday as the tournament hosts and favourites made a stuttering start in their quest to win the trophy for the first time.

Ngidi to Ben Stokes, catch out by Amla.

Rabada sends Woakes back to pavilion.

Rabada to Woakes, catch out by du Plessis.

Next batsman is Liam Plunkett.

Ngidi to Ali, catch out by Faffy.

Expect to see this a few more times over the next six weeks... pic.twitter.com/VLCavKlW6X

Next batsman is Moeen Ali.

Imran Tahir strikes again and takes the most crucial wicket of Morgan.

Tahir to Morgan, catch out by Aiden Markram.

What a crilliant running catch it is...

After two successive jolts, captain Morgan looks to lead the team towards a good total, expected 300+.

He has completed his half-century.

South Africa are is a desperate need of taking wickets but they managed to slow the run rate.

Kagiso Rabada to Root, catch out by JP Duminy.

Andile Phehlukwayo to Roy, catch out by the skipper Faf du Plessis.

South Africa needed this wicket to reduce the pressure.

Next batsman is the English captain himself, Eoin Morgan.

Both Jason Roy and Joe Root complete their half-century

Roy has completed his half-century in 51 balls. His 50 includes seven fours.

On the other hand, Root also lifted his bat after completing the fifty.

Both the players have diluted the pressure by changing the strikes and South African bowlers are trying hard to get wickets here at this moment.

Root and Roy have accelerated the innings with some terrific shots.

It just the first over and Imran Tahir gets the breakthrough for his side.

Tahir to Jonny Bairstow, edged into the hands of wicket-keeper Quinton de Kock.

Bairstow departs on a golden duck.

England scored 1 runs in the over and lost 1 crucial wicket.

The match is about to begin, Jason Roy and Jonny Bairstow are at the crease. Roy will face the first ball.

It is expected to be a cloudy, dry day in London, with little bit of sunshine.

What the captains are saying:

Faf du Plessis: "A 10.30 am start at The Oval -- if there's anything in the wicket, it'll be in the first hour. We've got some fantastic fast bowlers and we're hoping it'll be a great occasion today."

Eoin Morgan: "We would have looked to do the same, just preferring chasing. The wicket looks really good. The balance we've gone with is for South Africa so hopefully it is the right one."

"Jofra (Archer) has come in and impressed. He's very calm when he plays. He's a very exciting prospect given this is the very start of his international career. The favourites tag sits with us comfortably. It's been a collective drive for us. I much prefer going in as favourites," Morgan added.

South Africa won the toss and opted to field first against England in the opening match.

England, the world's top-ranked one-day international side and the tournament favourites, included fast bowler Liam Plunkett in a line-up captained by Eoin Morgan, with Tom Curran missing out on his Surrey home ground.

England will put four years of planning to the test when they face South Africa at the Oval.

So embarrassing was England's first-round exit at the 2015 edition in Australia and New Zealand it prompted a major rethink of their attitude to the white-ball game.

Batting has been the basis of England's ODI rejuvenation, with Jason Roy, Jonny Bairstow, Joe Root, Morgan and the dynamic Jos Buttler among a top seven who can all change the course of an innings in the blink of an eye.

South Africa have suffered plenty of World Cup heartache but having been losing semi-finalists four years there is a sense the Proteas are going under the radar this time around.

They will be without Dale Steyn on Thursday as the outstanding fast bowler nurses a shoulder injury but South Africa have become used to his absence in recent times.

Of arguably greater importance for Thursday's match is that Kagiso Rabada, arguably the leading paceman in world cricket today, has been passed fit following a back injury.

Who is your favourite?

About the World Cup:

The countdown of the Cricket World Cup 2019 has ended and a month-long cricket carnival begins with the first match between England and South Africa.

The twelfth edition of Cricket World Cup, hosted by England and Wales, is scheduled to take place from May 30 to July 14.

The host nation have never won the tournament, with the last of their three losing appearances in the final coming in 1992, but there is a growing sense their current crop of players can end 45 years of pain.

Boasting a plethora of big-hitting white-ball specialists, England are the top-ranked team in the 50-over game, while Kohli's India are also packed with superstars who have honed their skills in the Indian Premier League.

Hello! And welcome to the first match of the Cricket World Cup 2019 which is between England and South Africa.