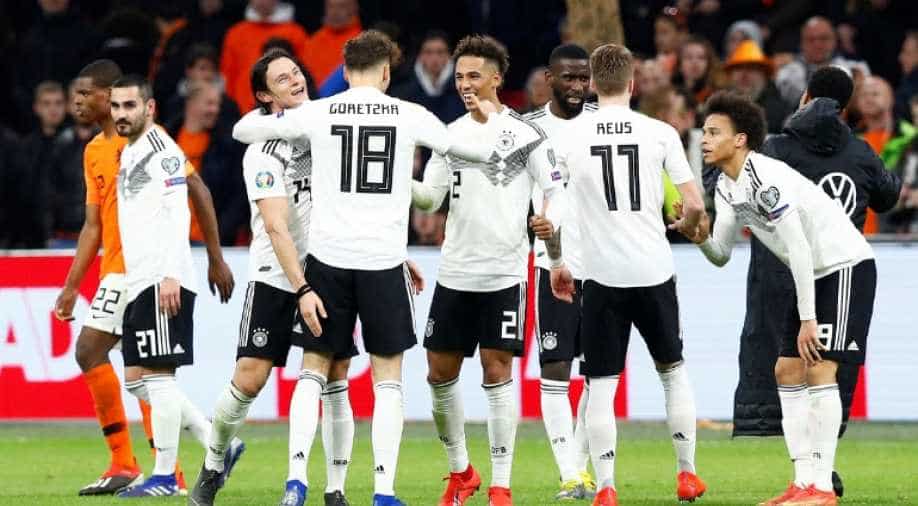 Germany had seemed well set for victory after a superb first half produced goals for Leroy Sane and Serge Gnabry to give coach Joachim Loew an unexpected fillip as he seeks to restore the flagging fortunes of the 2014 world champions.

Germany defender Nico Schulz scored a late winner as their new-look side snatched a 3-2 win away to the Netherlands in their opening Euro 2020 Group C qualifier on Sunday, an absorbing clash that swung in fortunes from one side to the other.

Germany had seemed well set for victory after a superb first half produced goals for Leroy Sane and Serge Gnabry to give coach Joachim Loew an unexpected fillip as he seeks to restore the flagging fortunes of the 2014 world champions.

But some of the frailties of the last 12 months returned as they let their grip on the game slip, with Memphis Depay laying on a goal for Matthijs de Ligt and then scoring the equaliser himself in another influential display from the in-form forward.

Wing-back Schulz produced the decisive moment of the match though when he netted in the final minute after a fine build-up down the left to re-establish Germany's advantage and claim a crucial victory to get their qualifying campaign underway.

Northern Ireland head the group after goals from Jonny Evans and Josh Magennis gave them a 2-1 win over Belarus on Sunday and a perfect start of six points from two games.

Germany and the Netherlands have three points each, though the latter have now played two matches.

After Netherlands goalkeeper Jasper Cillessen had denied Gnabry at close range, the visitors hit the front as Schulz provided a low cross from the left from which Sane took a touch and scored with a powerful shot.

A rampant Germany doubled their advantage after 34 minutes as Gnabry twisted his way around Netherlands defender Virgil van Dijk before curling a 25-metre shot into the corner of the net, the fifth international goal in six caps for the former Arsenal forward.

The Dutch pulled one back within three minutes of the halftime break though as Depay provided an inviting cross for teenage defender De Ligt to head home his first international goal.

Depay, fresh from two goals and two assists on Thursday against Belarus, levelled the score just past the hour-mark with a low finish into the bottom corner as the visitors failed to clear the loose ball in the box.

It was the second time since November that the Netherlands had come from two goals down to equalise against Germany, and for Depay it was his 11th goal in his last 15 internationals.

But the visitors had the final say as Marco Reus’s pass found an unmarked Schulz in the box and he was able to settle the contest with a low finish that gave Cillessen no chance.

Playing behind closed doors will expose players' ugly and dirty side: Sunil Chhetri

John Barnes: League title will be fantastic for Liverpool but success must not stop here