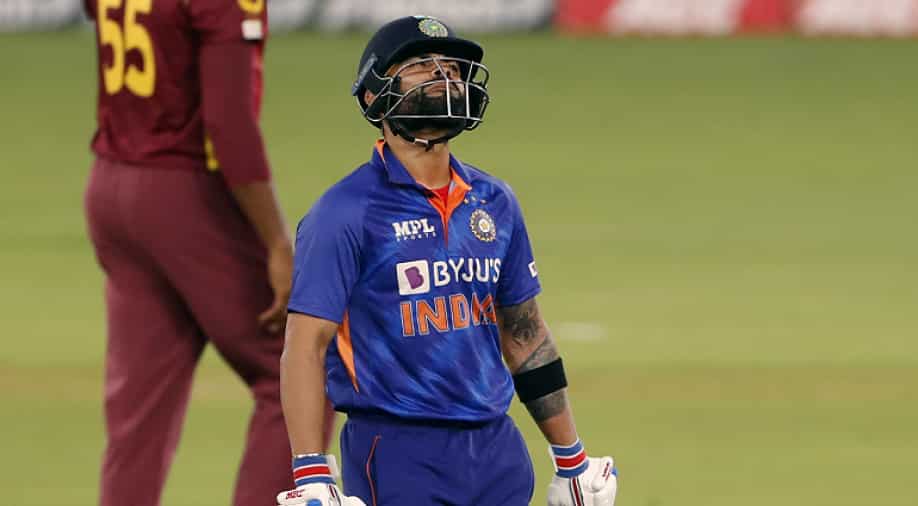 Virat Kohli, who has been succeeded by Rohit Sharma as Team India's white-ball captain, ended with only 26 runs in the three ODIs versus the Men in Maroon, crossing the double-digit mark only once. Will he get a big score in the upcoming T20Is?

Virat Kohli's batting form has been a topic of discussion of late. While it is well-known by now that the 33-year-old's last international ton came in late 2019, in the pre-Covid era, the former Indian skipper has been among runs -- especially in the white-ball formats -- but had a forgettable three-match ODI series versus West Indies.

Kohli, who has been succeeded by Rohit Sharma as Team India's white-ball captain, ended with only 26 runs in the three ODIs versus the Men in Maroon, crossing the double-digit mark only once. Ahead of the three-match T20I series between both the teams, in India, batting coach Vikram Rathour played down Kohli's form struggles.

"I don't think he's going through a lean phase. I understand he had a poor series against the West Indies (in ODIs) but no conversation as such," Rathour said in a media interaction ahead of the 1st T20I between India and the West Indies.

"He's batting really well in the nets and the kind of preparation he's putting in. We are waiting for... I'm certain that in one of these innings he will be back among runs," batting coach Rathour added.

For the unversed, Kohli endured his worst ODI series in 9 years, during Rohit-led India's 3-0 whitewash over West Indies. Thus, he will be eager to turn the tide in the forthcoming three T20Is. He has been in good form in the shortest format, with five fifty-plus scores in last ten innings, and will be desperate to get a big score under his belt.

The three T20Is commence on February 16, in Kolkata.