Dinesh Karthik is as close as it gets to MS Dhoni: Faf du Plessis lauds RCB's finisher after KKR win 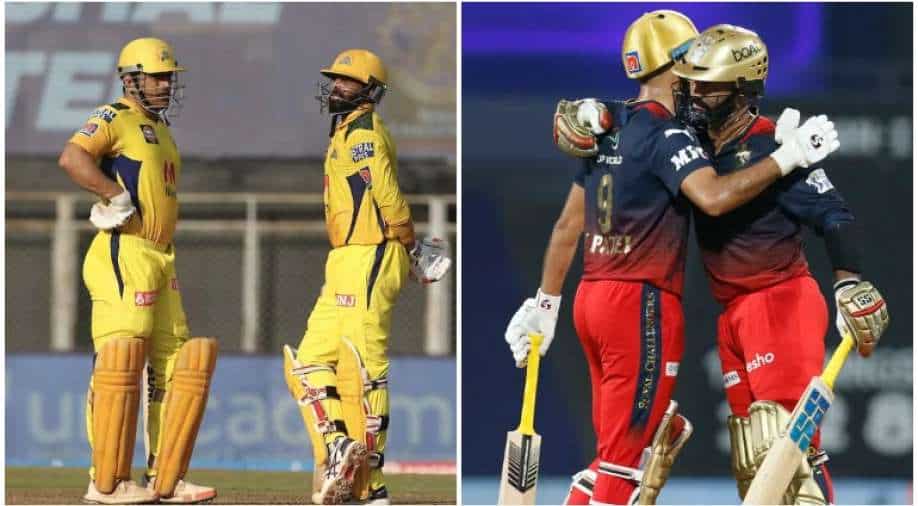 Royal Challengers Bangalore (RCB) went past Kolkata Knight Riders (KKR) in a thrilling match 6 of the IPL 2022 edition on Wednesday evening (March 30), at the Dr. DY Patil Stadium, Mumbai. Chasing a paltry 129, RCB were made to work hard for their runs before Shahbaz Ahmed's 20-ball 27 and finishing knocks from Harshal Patel-Dinesh Karthik propelled the side home.

Being asked to bat first, KKR only managed 128 all-out in 18.5 overs as Wanindu Hasarange's 4 for 20, Akash Deep's 3 for 45 and Harshal Patel's 2 for 11 did the trick for Bengaluru. In reply, RCB lost big guns such as skipper Faf du Plessis and Virat Kohli early in the run-chase before Shahbaz's vital knock and DK-Harshal's boundaries took RCB to their maiden win of the season. After the game, Faf lavished huge praise on Karthik and compared his finishing skills to Chennai Super Kings (CSK)'s former skipper MS Dhoni.

The RCB skipper said at the post-match presentation, "The runs were never a problem. We just needed to have wickets in hand. DK is as close as it gets to MS Dhoni when it comes to being ice cool. I rely on other people for help. We have great people in the camp."

Du Plessis added, "Close small margins game are very important at the start. Small score, we just tried to be positive but very good bowling from their seamers. The ball swung a little more earlier but today there was seam and bounce. Two three days ago, it was 200 and today it was 130. We would like to be more convincing."

After two games, DK has been on a roll. He is yet to be dismissed in the 15th season and has played two gem of an innings, 32* (14) versus Punjab Kings (PBKS) followed by a match-winning 7-ball 14 not out. He has a strike-rate of 219.04, including 4 fours and an equal number of sixes. He will be eager to carry on in a similar stread and make a case for selection in India's 2022 T20 World Cup squad.