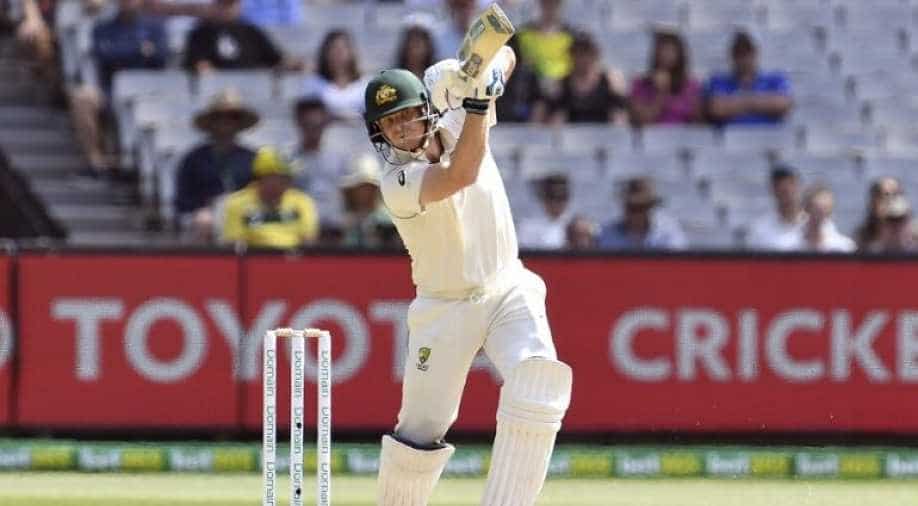 Australia's batsman Steve Smith drives a ball from the New Zealand bowling on the second day of their second cricket Test match at the MCG in Melbourne on December 27, 2019. Photograph:( AFP )

Smith, who is pushing toward 1,000 runs in 2019 in only his eighth match of the year, was more than pleased with the hosts' opening day as they look to seal the three-match series 2-0 with victory in Melbourne

Steve Smith continued his love affair with the Melbourne Cricket Ground (MCG) as he struck an unbeaten half-century to put Australia in charge at 257 for four at the close of the opening day of the Boxing Day test against New Zealand on Thursday.

Under some pressure after a modest home summer, Smith thwarted a largely disciplined New Zealand attack to thrill a festive crowd of nearly 80,000 at a venue where he now averages a stratospheric 148.83 from his seven matches.

The former skipper was 77 not out at stumps, with middle order batsman Travis Head on 25.

New Zealand captain Kane Williamson won the toss and sent Tim Paine's side in to bat on a grassy pitch under an overcast sky and was duly rewarded with a wicket after four balls when recalled paceman Trent Boult bowled Joe Burns for a duck.

But the clouds parted and the tourists managed only three more scalps for the rest of the day as the sun beat down on a much-scrutinised drop-in wicket.

Smith, who is pushing toward 1,000 runs in 2019 in only his eighth match of the year, was more than pleased with the hosts' opening day as they look to seal the three-match series 2-0 with victory in Melbourne.

"There's a nice little patch on the four-five metre mark (on the pitch) and if you hit that consistently the balls were doing funny things," said Smith, who came into the match with a total of 99 runs from his previous four innings against New Zealand and Pakistan in the home summer.

"It's not the kind of wicket you could go after them. I think we did pretty well today."

Australia had resumed at 155 for three after tea, with Smith and Matthew Wade looking to build on a promising partnership.

All-rounder Colin De Grandhomme had Wade caught behind for 38 on his 32nd birthday to snap a 72-run stand with Smith.

De Grandhomme earlier broke a stubborn 83-run partnership for the third wicket by bowling Marnus Labuschagne for 63, the ball pinging off his elbow and onto the stumps after the number three batsman failed to play a shot.

After Burns' early dismissal, Warner and Labuschagne hung tough in a 60-run partnership in the morning session, riding their luck as they played and missed a slew of swinging deliveries from New Zealand's diligent pacemen.

Opener Warner was finally out for 41, nicking seamer Neil Wagner to the slips where Tim Southee took a diving one-handed chance.

With Australia having won the opener in Perth by 296 runs, Williamson's team will be desperate for early wickets on day two to boost their chances of a series-levelling victory in their first Boxing Day test at the MCG in 32 years.