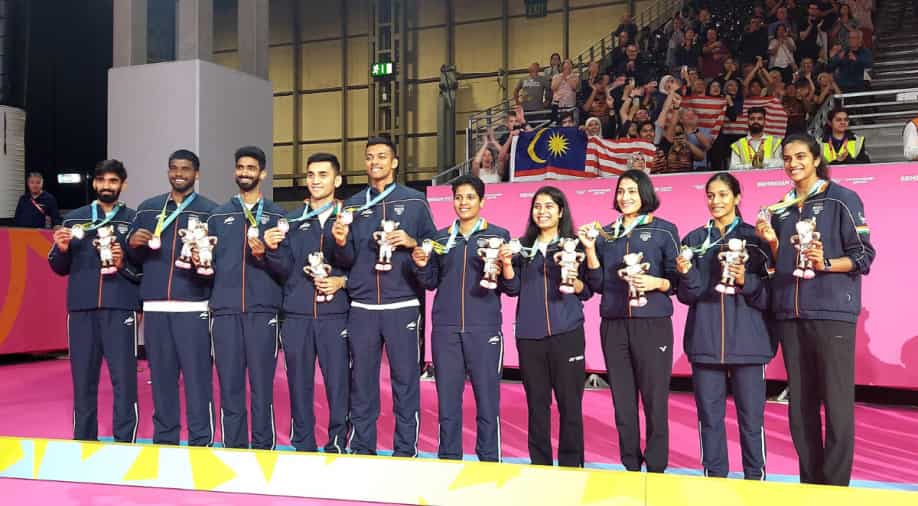 In this picture, Indian silver medallists in the badminton mixed team can be seen at the Commonwealth Games 2022 Photograph:( Twitter )

Indian badminton team claimed the silver medal in the mixed group match of the Commonwealth Games 2022 on Tuesday.

Indian badminton mixed team suffered a 1-3 defeat against Malaysia and had to settle for silver. Only PV Sindhu managed to earn a win in the summit clash against Malaysia in the women`s singles match.

In the first match of the tie, India`s Chirag Shetty and Satwiksairaj Rankireddy were locked in a tough first game against Malaysia`s Teng Fong Aaron Chia and Wooi Yik.

In the hard-fought neck-to-neck match Malaysia duo drew first blood and took the first match 21-18, 21-15. In the second match of the tie, PV Sindhu took on Jin Wei Goh. The opening game of the match saw the double Olympic medallist playing aggressively to take one game lead over Malayasia`s Jin Wei Goh by 22-20.

Star Indian shuttler looked fast, accurate, and extremely dangerous, to claim the second game and match by 22-20, 21-17 to pull India back into the match. In the third match of the tie, Kidambi Srikanth went down 19-21 against Malaysia`s Ng Tze Yong in the opening game.

Malaysian player kept his pace and momentum to register a brilliant win over Indian ace by 21-19, 6-21, 21-16 in a match that lasted for one hour and six minutes. After the match, Malaysia took a 2-1 lead.

In the fourth match of the fixture, Treesa Jolly and Gayatri Gopichand went against Muralitharan Thinaah and Koong Le Pearly Tan. Indian pair lost the first game 18-21. The Malaysian pair won the second game 21-17 to clinch the gold medal in Games 2022.