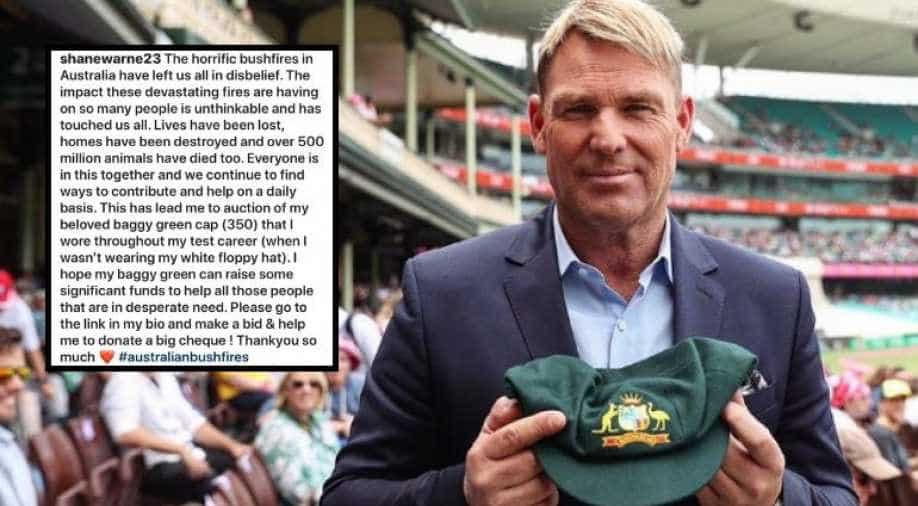 Shane Warne posted on his social media that he was putting up his 'baggy green cap' up for auction. Photograph:( Twitter )

The whopping price at which Shane Warne's baggy green cap was sold (A$1,007,500) beats all auctioning items sold by cricketers worldwide.

Former Australian leg-spinner Shane Warne in his social media account announced that his 'baggy green cap' which was up for auction fetched more than a $1 million Australian dollars.

The amount will be donated to the Australian Red Cross Disaster Relief and Recovery Fund to help fight the Australian wildfires rampaging New South Wales and Victoria.

The auctions opened on January 5 and closed today. The cap went for more than one million Australian dollars, with bidding closing at A$1,007,500 to a user by the name 'M.C. from Sydney', as per sources.

The funds will enable the Red Cross to support those affected by the horrific wildfires which have ravaged Australia.

“Thank you so much to everyone that placed a bid and a huge thank you/congrats to the successful bidder – you have blown me away with your generosity and this was way beyond my expectations!” Warne posted on social media. “The money will go direct to the Red Cross bushfire appeal. Thank you, thank you, thank you.”

"Don't get complacent from the rain we have had recently," Victoria Emergency Services Minister Lisa Neville said in a televised briefing, referring to several days of cool weather that has allowed firefighters to strengthen containment lines around blazes that have been burning for months.

Twenty-six people have died, thousands have been made homeless and thousands of others have had to evacuate repeatedly as the monster fires have scorched through more than 10.3 million hectares (25.5 million acres) of land - an area the size of South Korea.

Formula One's star champion Lewis Hamilton has also stood by the cause by donating A$500,000 to Australian Fire Service and Animal Rescue Services.

Scientists say that the massive fires which do not show any sign of reducing have already killed over 50 million animals. However, ecologists at the University of Sydney on Wednesday doubled their estimate of the number of animals killed or injured in the fires to 1 billion.

The whopping price at which the baggy green cap was sold (A$1,007,500) beats all former records of auctioning personal items sold by cricketers.

The new list puts Shane Warne's cap at pole position, followed by Don Bradman's Test cap at A$323,000, and then Mahendra Singh Dhoni's cricket bat at A$190,000.

MS Dhoni had put up his 2011 World Cup bat for auction to raise funds for his wife's charity - the Sakshi Foundation, which works for underprivileged children in India.

Other cricketers from the Big Bash League have also pledged to extend their support by donating towards fighting the bushfires, among whom are Chris Lynn and Glenn Maxwell.

Love it Lynny!!
I’ll match you on $250 per six I hit in this years BBL. Great cause which is helping so many people around the country who are doing it tough right now. 🙏 https://t.co/hcJea0B6hh

"It is special to see so many athletes from various sports getting in behind the real heroes who are fighting to save lives and properties around our country," Lynn tweeted.