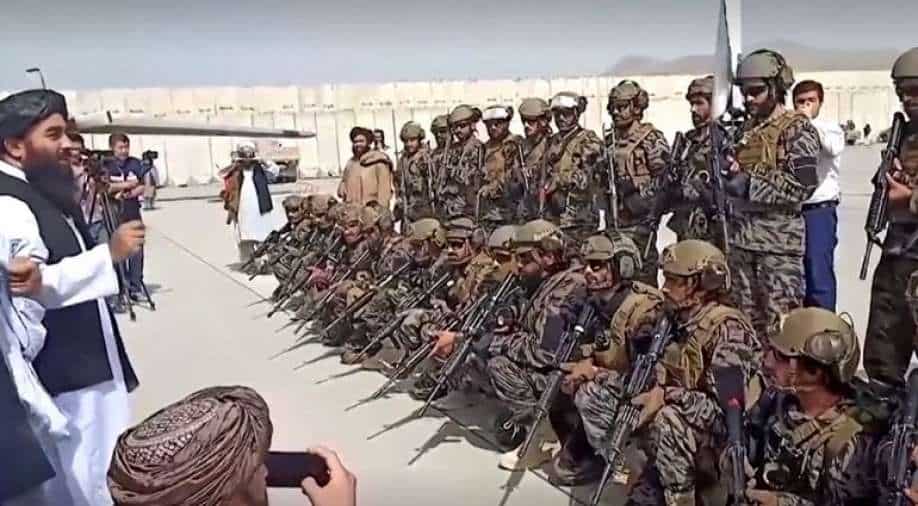 Screen grab from the Al-Emarah video Photograph:( Others )

Congratulating the soldiers, Mujahid said that he hopes Afghanistan will never again be occupied and will be a free, prosperous country inhabited by Afghans

Taliban spokesman Zabihullah Mujahid on Tuesday urged Taliban soldiers to 'treat the people well', adding that they were entitled to 'peace'. His remarks came hours after the last of the United States and allied troops withdrew from Kabul airport.

Al-Emarah, a Taliban-affiliated media outlet published footage of Mujahid's interaction with the Badri 313 unit. In the footage, elite soldiers from the Badri 313 unit were seen standing before Mujahid, decked in modern military fatigues.

He congratulated them and said that he hopes Afghanistan will never again be occupied and will be a free, prosperous country inhabited by Afghans and that there will be an Islamic government in place.

Adding a word of caution to his congratulatory message he said "However, I still ask you to be very careful in behaving with people. The nation has suffered a lot, and they have been repressed because of the occupation, have seen problems for 20 years, and can no longer tolerate misbehaviour."

Finally, he noted that ensuring that Afghans are treated properly by the military is important, proclaiming, "we are the servants of the nation", and that the Taliban is not there to dominate the people.

Also read | As Taliban gain complete control of Afghanistan, Kabul residents hold on to hope for a 'peaceful' future

In spite of this the people, however, remain sceptical of the future they face. As the Taliban celebrated the withdrawal of US troops, many Afghan residents of Kabul fear a return to the Taliban's infamous 1996-2001 rule where women and girls especially were treated harshly.

A minute before midnight, the last US forces left on C-17 aircraft, ending Washington's embarrassing departure from Afghanistan and bringing an end to a war that ironically left the Islamist militia stronger than it was in 2001.