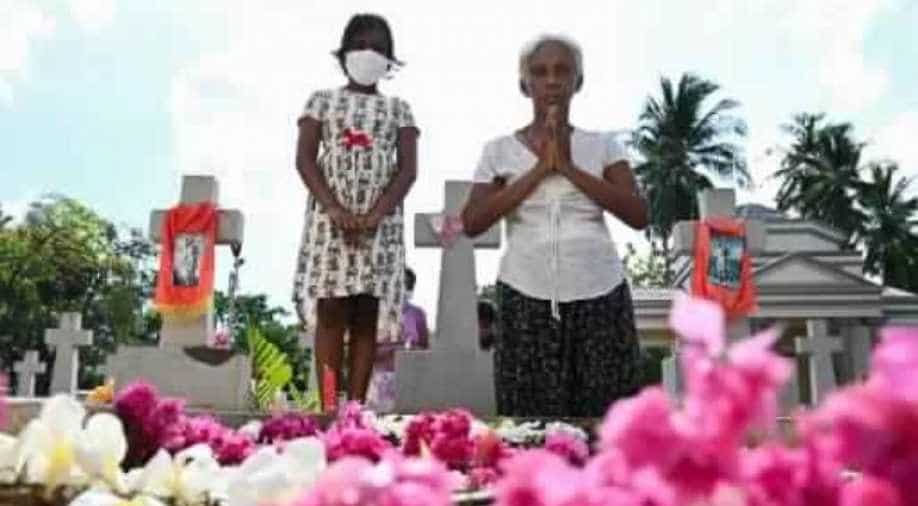 Relatives pay their respects at a graveyard for St. Sebastian's Church bomb blasts victims in Negombo on April 21, 2020, to mark the first anniversary of the attacks. Photograph:( AFP )

In a letter written by Jayasundra and accessed by an agency, he said: "In the past month you could not travel, go shopping. A lot of spending was curtailed."

Sri Lanka has asked its 1.5 million government employees to donate their May salary to boost the country's economy amid coronavirus lockdown.

The country has suffered massive setbacks since last year's Easter bombing that killed 279 people with the tourism sector been the worst-hit since the outbreak of the virus.

The Lankan government had imposed a nationwide lockdown on March 20 shutting down all industries, shopping complexes, bars as the coronavirus cases began to rise. Only shops with essential supplies were allowed to stay open.

P.B. Jayasundara, a top civil servant has asked all the government sector employees including the armed forces and the police to give away their monthly income (May) to help the country's economy during the lockdown. He called it a "social responsibility."

In a letter written by Jayasundara and accessed by an agency, he said: "In the past month you could not travel, go shopping. A lot of spending was curtailed."

"While seeking loans and aid from other countries, we must also demonstrate our internal strength... Consider it (the donation) as your social responsibility at this time of crisis."

Jayasundara assured that such mass donations will reduce the budget deficit and will help Sri Lanka manage their national debt by saving some 100 billion rupees ($525 million).

Jayasundra is leading the initiative by donating his May's salary.

According to Prime Minister Mahinda Rajapaksa, Sri Lanka has not received any international financial aid to fight the virus. He rubbished any rumours of his government misusing any financial aid.

The economic growth of the island nation slowed to 2.3 per cent last year compared to an expansion of 3.3 per cent in 2018.

Sri Lanka has 797 positive virus cases and nine deaths, according to government figures.