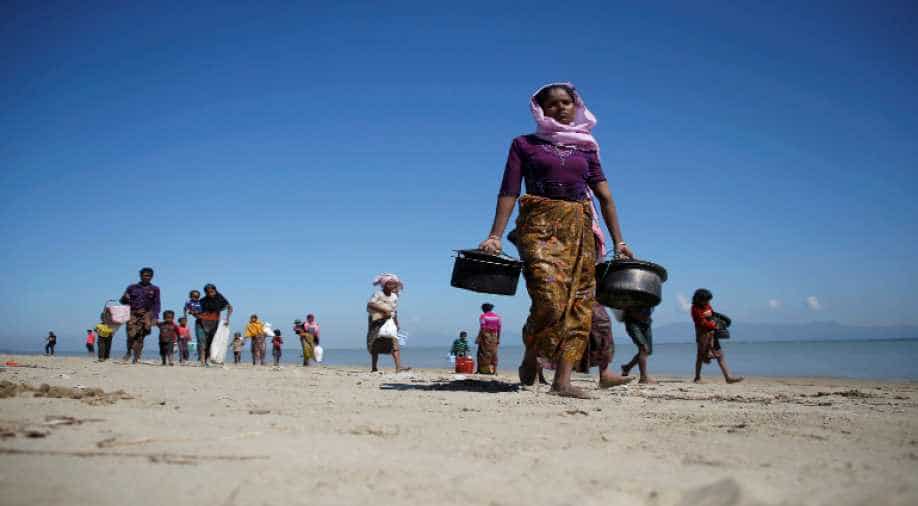 Hundreds of Rohingya families have left India for Bangladesh since seven Rohingya men were deported to Myanmar in October.

Bangladesh has denied entry to 31 Rohingya Muslims trying to enter from India and they are stuck in no man's land on the border, Bangladesh authorities said on Monday, as India cracks down on members of the community.

The stranded Rohingya, including women and children, had been living in the Indian state of Jammu and Kashmir, according to a Border Guards Bangladesh (BGB) official who said he had seen some of their identity cards issued by the UN refugee agency in India.

The 31 had been stuck on Bangladesh's border with northeast India since Friday, said the BGB commander in the area, Golam Kabir.

"We stopped them as they were crossing the border," Kabir told Reuters by telephone.

"They've been on the zero lines since the 18th of this month," he said, referring to the border. Two rounds of talks on what to do with the 31, with India's Border Security Force on Sunday, had "ended without any conclusive decision", Kabir said.

Many hundreds of thousands of members of mostly Buddhist Myanmar's Rohingya community have left their homes in Myanmar's Rakhine State over the decades, most fleeing military crackdowns and discrimination.

Many have sought shelter in Bangladesh - where nearly 1 million live - but others have ended up in India, Southeast Asia and beyond.

An Indian border force officer in Tripura state told reporters on Sunday that they were providing food and clothing to the Rohingya, 16 of whom were children.

The force could not be reached for comment on Monday.

India estimates that 40,000 Rohingya are living in scattered settlements in various parts of the country.

But its government regards them as illegal aliens and a security threat and has ordered that they are identified and repatriated.

The UN refugee agency, UNHCR, has issued about 16,500 Rohingya in India with identity cards that it says can help "prevent harassment, arbitrary arrests, detention, and deportation". India does not recognise the cards.

Hundreds of Rohingya families have left India for Bangladesh since seven Rohingya men were deported to Myanmar in October. This month, India sent a Rohingya family of five to Myanmar.

The United Nations says conditions are not conducive for Rohingya to return to Myanmar.

In August, the United Nations accused the Myanmar military of mass killings and rapes of Rohingya with "genocidal intent" in a 2017 military operation that drove more than 700,000 of them into Bangladesh, according to UN agencies.

Myanmar has denied the accusations, saying its military launched a counter-insurgency operation after attacks on security posts by Muslim terrorists.