Myanmar's economy to shrink by 10% this year as protests swell: World Bank 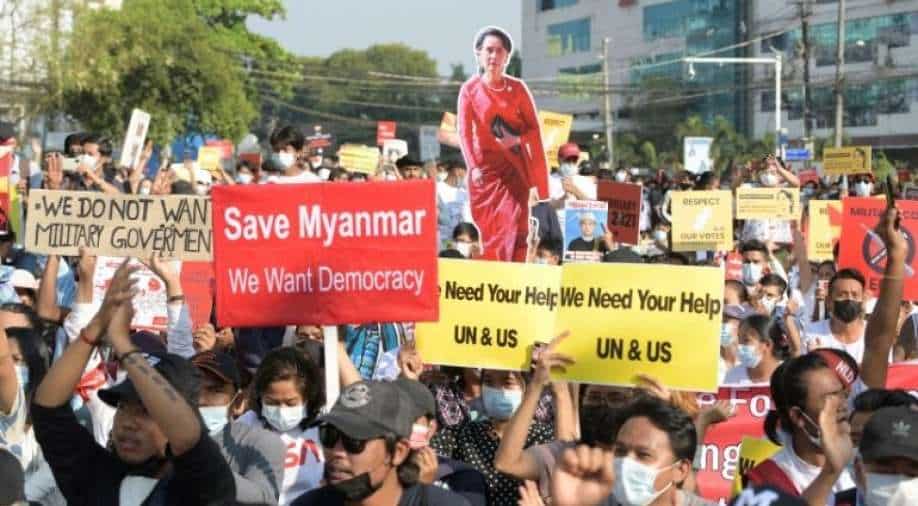 Demonstrators hold placards and a cutout with the image of Aung San Suu Kyi during a protest against the military coup in Yangon, Myanmar, February 15, 2021 Photograph:( Reuters )

Earlier forecasts by the World Bank expected a 5.9 per cent growth for Myanmar, back in October 2020

Myanmar’s economy is set to contract by 10 per cent in 2021, as per forecasts by World Bank released on Friday. Currently, the Southeast Asian nation is witnessing nation-wide protests, strikes, and sanctions after a military coup ousted Aung San Suu Kyi on February 1.

Earlier forecasts by the World Bank expected a 5.9 per cent growth for Myanmar, back in October 2020. This marks a sharp decline from one of the strongest growth rates in the region.

“Myanmar has been heavily affected by protests, worker strikes, and military actions; reductions in mobility; and the ongoing disruption of critical public services in addition to banking, logistics, and internet services", the World Bank said.

A civil disobedience campaign is underway in Myanmar, and protesters have targeted the economy, halting the baking system and urging foreign investors to pull out till democracy is restored.

The junta leadership has regularly shut down internet to curb voices of protests in the are, which has also undermined economic activity.

The country has witnessed daily protests since 1 after the military installed the junta. Suu Kyi, along with other members of the National League for Democracy (NLD) remain in detention.

According to an estimate the Assistance Association for Political Prisoners (AAPP), at least 320 people have died in the protests till Thursday.