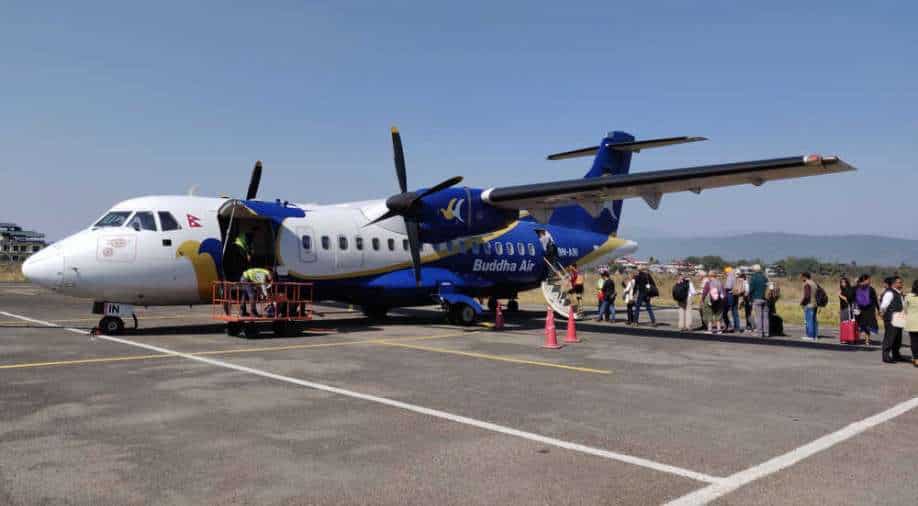 A rare flight mix-up led to the inadvertent incident that took place on December 18. Photograph:( Twitter )

The weather was not quite favourable for the flights on Friday so carriers were making use of every available weather window to take the passengers on board as quickly as possible and take off, the report said.

Nepal-based airline Buddha Air plane landed at an airport 250 miles from its intended destination due to a communications mix-up.

On December 18 Buddha Air flight from Kathmandu's Tribhuvan International Airport had been scheduled to land at the southern city of Janakpur, but instead travelled to the city of Pokhara, about 250 miles away.

The weather was not quite favourable for the flights on Friday so carriers were making use of every available weather window to take the passengers on board as quickly as possible and take off, the report said.

Buddha Air's flight U4505 was cleared to take off for Janakpur airport in the plains.

Passengers were taken in and the plane took off, with its estimated arrival time at Janakpur by 3:15 pm. When it took off, it had already been delayed. But when it landed, it actually landed in Pokhara instead of the destination airport.

According to the preliminary report, due to weather issues, flights to Pokhara were permitted until 3 pm under the visual flight rules (VFR).

The VFR is a set of regulations under which a pilot operates an aircraft in weather conditions generally clear enough to allow the pilot to see where the aircraft is going.

"The weather was already causing flight delays and to make up for the flying time, Buddha Air officials decided to fly to Pokhara first," said an official at the airline company.

Accordingly, the flight number was changed and the mix-up happened.

Buddha Air admitted to serious lapses on its side, the report said.

Birendra Bahadur Basnet, Managing Director of the carrier, told the Post that they have formed a committee to investigate the incident.

"The difference in flight schedule between Janakpur and Pokhara was 15 to 20 minutes," said an official.

"The ground staff transferred [on paper] 69 passengers of flight U4505 to flight U4607 which actually was cleared for Pokhara by the air traffic controllers," said the official.

Everything was in the right order but the ground staff and the flight attendant failed to brief the flight's captain and co-pilot that the flight's number had been changed, according to the official.

"The flight attendant did make an announcement on the flight that it was heading to Janakpur," said the official.

"There was a miscommunication between the ground staff and the pilots," said the official.

"The flying pilots also did not look at the passengers' manifest."

Aviation experts say such incidents may happen, but they happen quite rarely.

Tri Ratna Manandhar, a former director-general of the Civil Aviation Authority of Nepal, said this is the second incident of such kind in Nepal's aviation history in the last two and a half-decades.

In 1993, a Twin Otter of the Royal Nepal Airlines Corporation had landed in Simara airport which was supposed to land in Bharatpur airport.

"The Buddha Air incident happened due to miscommunication. It's not part of safety lapses but it's a serious lapse on the part of management," said Manandhar.